There are very few artists of the same caliber as Massachusetts-based bassist, composer and singer Mal Devisa. We first heard about her more than a year and a half ago, and all we had to listen to at the time were her early EPs; we hosted her for our second-ever live concert in February 2015, and ever since we saw her perform we’ve been 100% obsessed. Now, she’s finally blessed us with a complete LP that perfectly melds her earlier, more soul-influenced compositional style with the newer loop-based and hip-hop influenced material that she’s been working into live sets for the past year or more. It’s an exciting thing, to hear one of your favorite artists mature drastically in recordings – but before I get too ahead of myself, you should probably take a listen to her debut LP entitled Kiid. 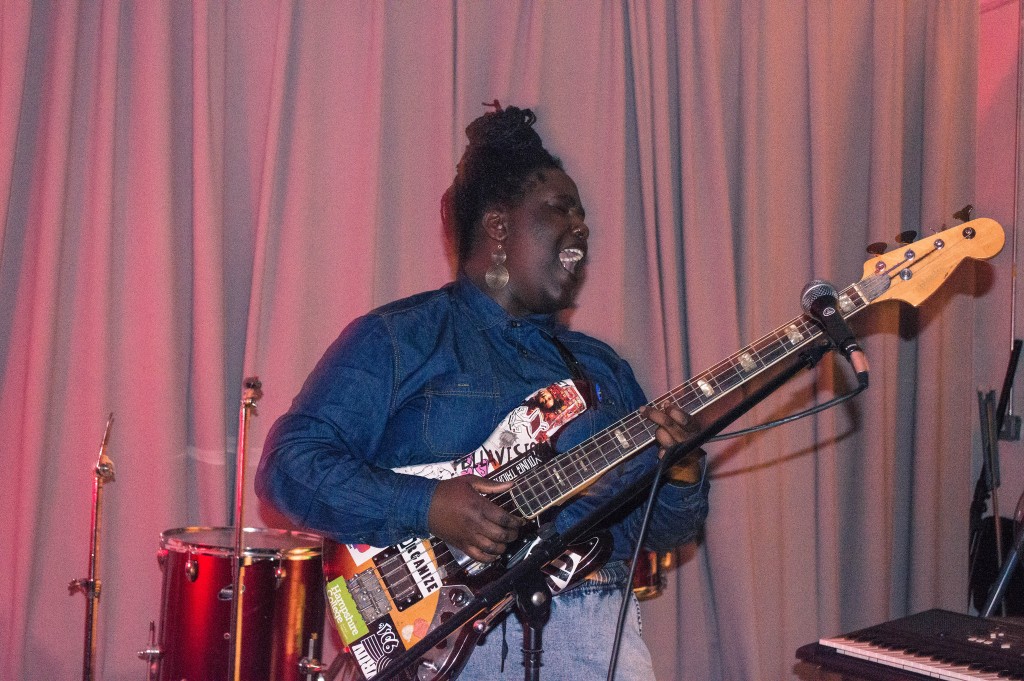 Mal Devisa performing for No Smoking in 2015.

As I mentioned above, about half of the tracks on Kiid will be familiar to anyone who’s ever seen Mal Devisa live. “Daisy” makes me recall the many times I’ve seen her go on stage and be a one-woman-band, belting out the lyrics with her pipes (“you could be lonesome, calling me baby, back against the wall”) and laying out the bass riff with her fingers and thumping the kick drum with her feet. The grit/distortion applied on the end of the track feels particularly glorious and necessary, and in fact both “Daisy” and “Fire” are reminiscent of the tone and stylings of Mitski (who Mal has shared the stage with). Another track that will be familiar for long-time fans is “Everybody Knows,” one of her softest and also most melodic numbers. It also has probably my favorite lyric by her (“I will make a road map out of your heart”). I’ve been showing people a live session of this track for literally years now:

But, believe it or not, Mal’s heartrending performances of her more acoustic-leaning numbers aren’t even what impresses me most about this record. It’s actually the new territory she’s been breaking into that really gets me fired up; the thing I’ve been trying to explain to people about Mal Devisa is that she doesn’t approach her music from just one direction. It’s a kaleidoscopic approach that seamlessly integrates pretty much whatever Mal is feeling at the moment – the last few months have seen the release of quite a few super compelling and empowered rap tracks from our very favorite goddess on earth. “Next Stop” is a track I hadn’t heard before, and I guess she took it off the album since I first downloaded it, but the lyrics stand out to me pretty strongly:

made a couple dollars selling white boys my setlist
they was in the basement blowing kisses to my fretless
they say, you the missus? i’m the mista, let’s forget this

All in all, what strikes me about this record (and, honestly, Mal’s facebook posts as of late) is that it’s absolutely bursting at the seams with confidence and inspiration. It feels like this is only the beginning of a colorful, varied, and intelligently-designed catalogue – it feels like the beginning of a real artist’s career, not some manufactured break-out tape, and this is confirmed even by her method of release (dropping a bandcamp link on her facebook with little warning). If there’s anything I’m certain of, it’s that any listener who puts on Mal Devisa will be wowed in only the most positive ways. This album is an expectation-breaker and probably one of my favorite albums of 2016 (already!) – if I had one complaint, it would be that “Next Stop” has been removed from her bandcamp, and I think listeners need to hear it. But, who am I to say what should go where?

Keep up with Mal Devisa on facebook and buy Kiid on bandcamp.