I’ve been waiting for the self-titled debut LP from NYC alternative rockers Ludlow Ejacula for over a year now – my familiarity with their live set is so extreme at this point that I could sing along to most of this record having never heard the tracks recorded before. So, you might say I’m coming at this from a pretty biased perspective. Heh. Now that I finally have the record downloaded to my computer, I’m able to listen to it on late-night nostalgic subway rides and moody walks through extremely gentrified areas of NYC, where its emotional punches connect most solidly with me. Indeed, portability is very becoming for this record – but I’ll explain more after you’ve actually let it grace your ears.

The record begins with a sharp slap of heavily-affected guitar, reverberating back and forth pleasantly between my monitors at home. “Major to Minor,” though perhaps not their most interestingly-titled track, is a delightfully tense and exciting introduction to Ludlow Ejacula for the first time listener, if a bit ominous before the first pre-chorus kicks in. As I mentioned before in my review of “Thinking In Dominoes,” guitarist Bryan Thornton’s tone selections for raw distortion are pretty much perfect, and they complement singer Emily Brout’s throaty conjurings with a chemical reaction I’m rarely lucky enough to hear in contemporary rock music. The second number is “Bitter,” one of my all-time favorites that was actually one of the first few tracks No Smoking covered at its commencement. The song is simple enough in its structure and chord progression – it’s pretty much a giant set-up for the chorus – but the hook is just such a sonic and emotional display of fireworks that there’s no real room for criticism. It’s at once anthemic, wallowing, and transcendent. What more can I say?

you’re useless, you can never be no one 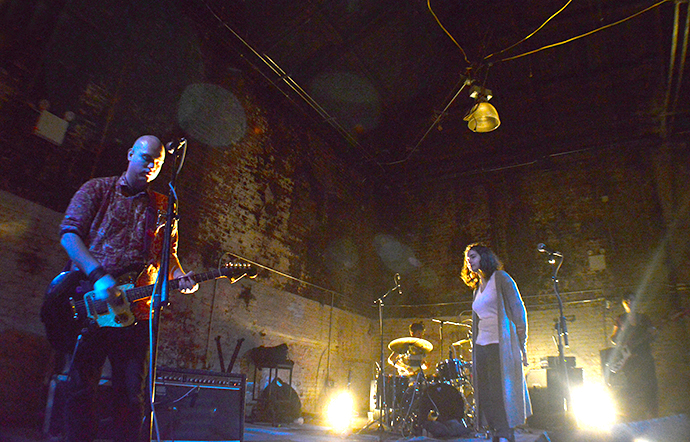 “Identities” is a pretty substantive track, but when it starts it might fool you into thinking it’s just an interlude. I think here, it’s fair to note that although Ludlow Ejacula has found a songwriting formula that works for them, it is indeed formulaic composition: quiet, guitar-driven choruses build tension into huge, money-chord choruses replete with hooks and memorable lyrics. Still, the textures are rich, and Emily’s vocal performance is consistent, so no complaints from me. “Thinking in Dominoes” features some of the best bass work on the record (by Maddy Brout, who splits the tracking on the record with Evan Moore), arranged in unison with a relentless unison part played by Bryan on guitar. Still, rhythmically, “Thinking in Dominoes” is probably the outlier on the record, and as a demanding listener I appreciate the variety. The drum work is also particularly intense and tight on this track (tracked by Justin Heaverin); thinking back, it feels like Heaverin had been holding back a little bit for the first half of the record, but honestly that’s a rare and valuable trait among drummers, so props to him for that.

The last 3 tracks of the record are considerably more somber: “Disjointed” is a sort of wheedling, nostalgic, and regretful number, while “Choking” is almost ballad-like in its playful sadness. “Semi-Colon” has perhaps the least movement on the whole record – Bryan plays a lilting and fluid finger-picked (?) guitar part alongside Emily’s wistfully imploring tone, and the record is played out in a grandiose-yet-bittersweet big rock finish that feels like it’s straight out of the 90s, complete with high-register vocal harmonies very necessary layerings of epic guitar. I guess if I had to conclude my impressions of the record, I would do so abruptly, sort of how the record ends – resting assiduously between EP and LP lengths, just how I like my debuts to be. Still, I think that listeners who don’t usually listen to feelsy alt rock (people who’ve never heard of Elliott Smith, for example) would do well to listen to the first four tracks and await more boundary-pushing stuff from Ludlow Ejacula. As someone who does like their music already, I can say that the Ludlow Ejacula record was a strong opener to what I expect to be a rich and varied lifetime catalog of albums – though there’s always room for improvement in compositional experimentation and possibly even recording locations, this album has some pretty high highs and a coherent approach, and that’s pretty much all I need.

Keep up with Ludlow Ejacula on facebook and buy their record on bandcamp.

We last heard from Living Hour when they released their music video for Steady Glazed Eyes. Now, the Canadian psych rockers have released a…