The room slowly filled up, both with people and chatter, and somewhere in all of this Mitski stepped off stage after setting up her gear, before her solo set at the Mercury Lounge. When she took the stage again, she did it calmly, patiently, the same manner she had had when she set up just moments before.

If you haven’t already heard of her, Brooklyn-based artist Mitski is no stranger to the stage. Her third album, Bury Me at Makeout Creek, was released a year ago and Mitski took the scene by storm, receiving acclaim from major publications such as Rolling Stone and Pitchfork, and a long string of interviews and reviews from other publications (including an NPR Tiny Desk Concert!). All the while, she’s been on and off the road in America and Europe, and she’s working on a follow up to Bury Me. But I’m not here to talk about things that you can Google (although you totally should).

The word ‘captivating’ doesn’t accurately represent Mitski’s set. On the first song, there were still a few people in the back of the room that were chatting; by the end of the second, the only sound in the room belonged to Mitski, the amplifiers channeling her guitar and voice, and the raucous applause that followed each song. You might say that it’s rare that you ever come across an audience that respectful, but I think that it’s almost impossible to find an artist that knows what to do with that intimate energy. It was as if Mitski had slipped into her music, leaving us free to find ourselves through her work. It was utterly compelling. 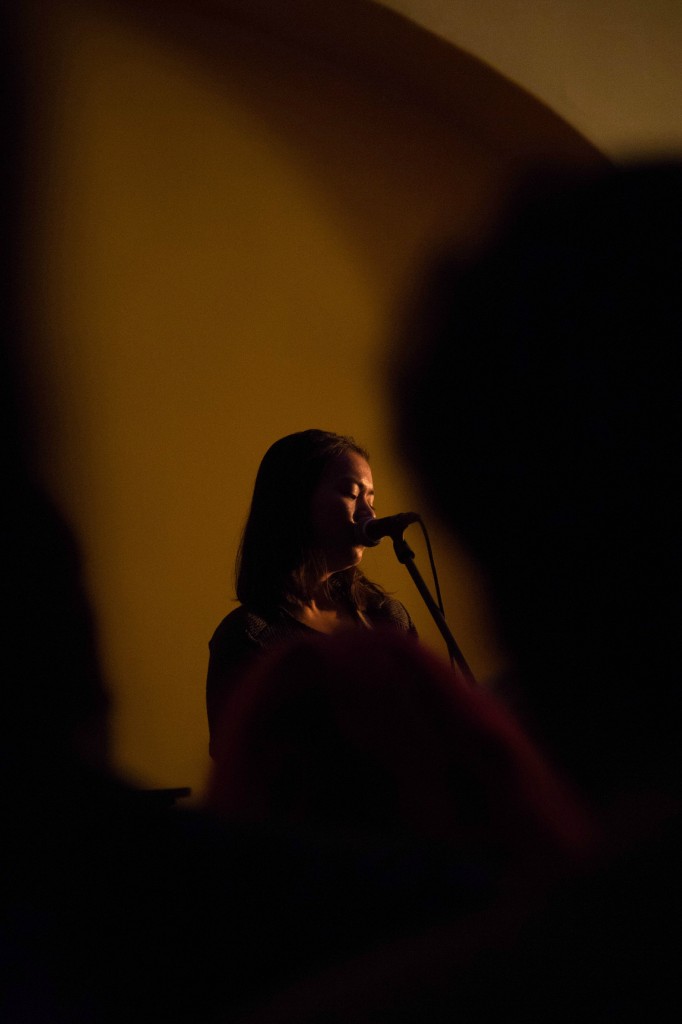 See, even though Mitski’s music is cohesive as a set, each song contains within it a world of diversity. Songs combine a head voice melody that’s barely a whisper with a furious guitar attack, and then, almost without warning, will change to a full out, gut-wrenching yell. She has a definitive command of well-chosen melodic embellishments in her lines, which only adds to the poetry that is her lyric. And the words themselves—the subject matter—is equally contrasting within the music. In “Class of 2013,” doubt is clothed in plain words and (at least in the live version) is screamed into guitar pickups over a sparse collection of rich, open, deliciously overdriven chords. But I’m not going to go any further into an ultimately subjective personal analysis.

Mitski’s music has been described as jarring, scary, dark, and it is all of these things, but it also feels strangely comfortable. Loneliness, desire, and heartbreak are treated not as intruding feelings that we must quell but as genuine parts of our condition. Dissonance is embraced. Emotions are splayed chaotically with utmost care and precision. In other words, Mitski sings what we might be too scared to even think, but which is undeniably close to us. And being there is like exhaling a deep breath.

Mitski took the stage again in a very different setting. If Mercury Lounge was an away game, then the Portals + Stadiums & Shrines unofficial CMJ showcase last night must be, well, as close to a home game as you can get. And it did feel like home. Or at least, homey. 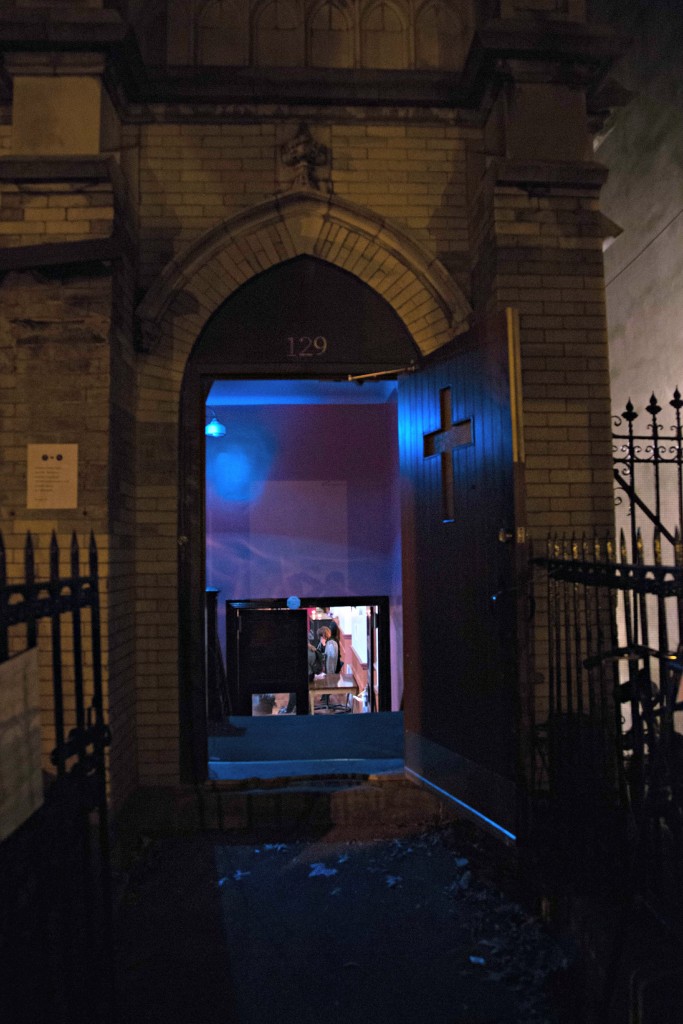 I walked into the venue, which is a space below the Lutheran Church in Greenpoint, and wandered around for a bit. I marveled at Long Beard’s (Long Beard is the moniker under which Leslie Bear composes/performs music) intricate guitar work and clean, spacey loops. I enjoyed a Brooklyn IPA from Portals’ donation based bar… and another one, making sure to leave a tip. Then I found a place for myself to sit on the floor without causing too much trouble. This was fortunate because Kaitlyn Aurelia Smith—the next act—had her audience sit on the floor so we could enjoy the experience (set is the wrong word) of the beautiful, articulate projections that accompanied her ethereal music. But once the other sets** were over, the whole room buzzed with anticipation for Mitski. 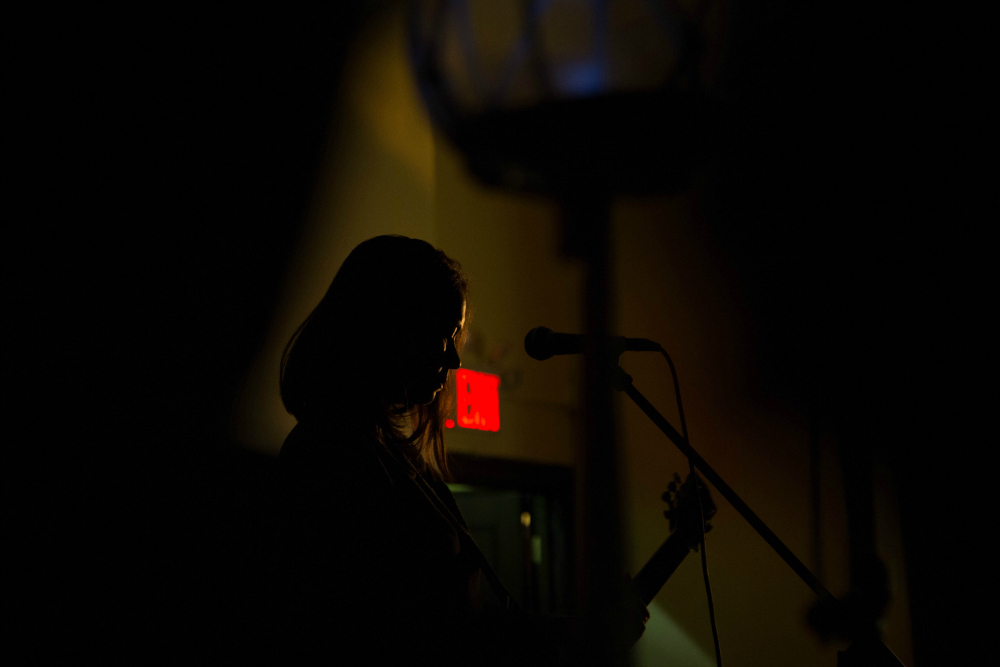 For all the difference in the venue and vibe, Mitski set up and played with the same respect and dedication to her craft as she had the night before. It was the same stripped-down, intimate energy, this time augmented by the stripped-down, intimate nature of the space. There was something else; for all that Mercury Lounge has in equipment and legacy, it lacks the familiarity that the Portals music community has with Mitski.

Close to her third song, or perhaps after “Townie”—which several people in the crowd were dancing to, despite or perhaps because of the sparse instrumentation of her voice and guitar—Mitski addressed the audience.

** johnny_ripper and Mal Devisa (a No Smoking Media favorite!) had also played sets earlier in the night.

Dave Amazin had a pretty hot stretch leading up to V-Day weekend, releasing a slew of singles and flexing hard as ever on social…