This past Sunday, January 31, Bushwick music venue Palisades hosted a one-time only event to celebrate the art of the music video: Audio Visuals. It featured 22 music videos as varied as the backgrounds of their makers — including Emmy® Award winner Robert Kolodny, Finnish director Anton Tammi, the mind­-bending local favorite Dylan Greenberg, and Brooklyn-­based cinematographer Fletcher Wolfe fresh out of Sundance. Needless to say, it was a DIY-star-studded affair. 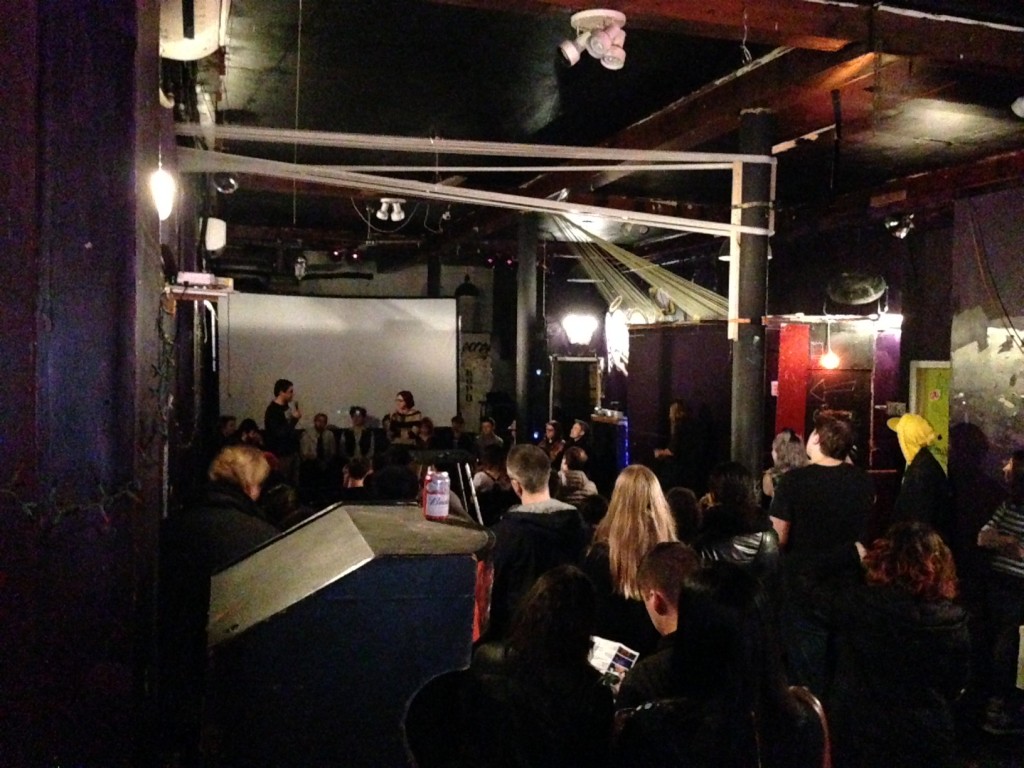 Locally based hip-hop artist KASSA started off the night with a performance to accompany his video for “Naked Light” (which premiered at the end of the night), directed by the incredibly prolific Ian Perlman. This opening performance was followed by another from Brooklyn rock band Kung Fu Crimewave, who introduced the screening with a performance in honor of the release of their new music video “Winter Squall”. Shot one stormy winter day on the Jersey Shore and directed by Brooklyn­-based filmmaker and “Audio Visuals” organizer Claire Ensslin, the video evokes how a 12­-year-­old might imagine a post­-apocalyptic wasteland.

Following the screening, over a dozen of the filmmakers in attendance took part in a panel segment to answer questions about their works and influences; while you won’t get to ask any questions, we’ve provided a full list of the videos that were screened on Sunday! As an added bonus, we’ve also included a time lapse video that shows the event itself.

Here’s a list of all the videos which were screened at Audio Visuals:

Eric Holljes – Good In My Hood

Crazy and the Brains – Biggest In the World

The Shilohs – The Place Where Nobody Knows I Go

I got the chance to interview Kasie Kirkland (a.k.a Yung Mayne) on her radio show High Wasted on kPiss, which airs every Thursday night…