*-ics = a science, in this case, a science of fusing beasts.

I was first introduced to Big Figment by Dara Hirsch (Operator, Gravesend Recordings) as potential collaborators — experimental funk/soul-influenced bands can have a hard time finding each other in the heavily garage/grunge/surf scene currently running the show in Brooklyn. We played a show with them over the summer in their backyard, a hidden garden complete with a trellised, overgrown outdoor stage and clotheslines drooping from the weight of local artists’ photographs. They called the space Elysium, and watching Big Figmentz perform their raucous, varied, eclectic set in animal masks, I felt like I had a front-row seat to an ancient Bacchan ritual. 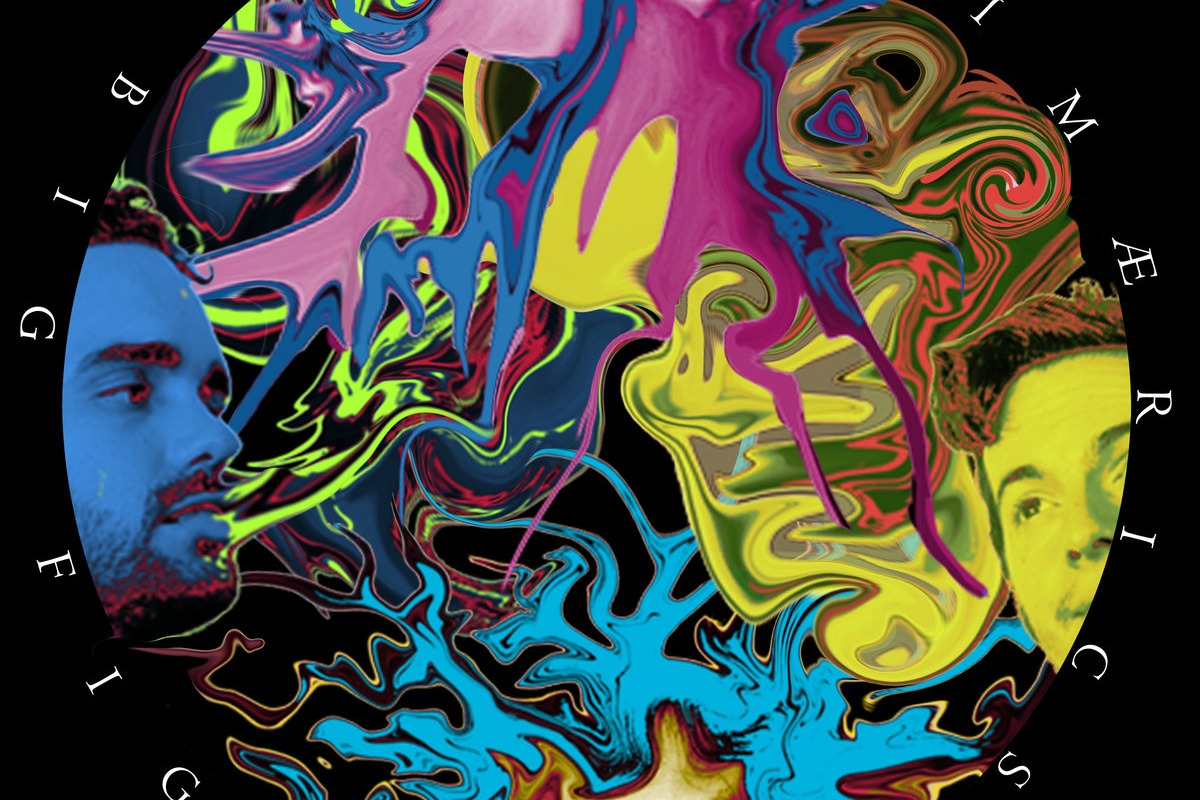 Listening to the band’s first full-length effort, Chimærics, only serves to strengthen that ritualistic vibe. Talking about the album, Jennae Santos (vox, guitar) uses words like “chaos” and “violence” to describe the sound — which is in direct opposition to the groups’ individual personalities (they are some of the sweetest folks you’ll ever meet) — but explains the cathartic, exposed, and explosive nature of many of the songs on the album, glowing like strange creatures of the deep turned inside out to bare otherworldly skeletons.

The opener Cut Knuckle starts with a deep, quick bass groove played by Pete Longofono, haltingly punctuated by Andrew Linn’s trumpet crescendoes and Jennae’s whispered vocals (“There is no escape. We pay for the violence of our ancestors”). This groove opens up into a triumphant downtempo section, before the groove returns with Jennae’s almost-shouted vocals (she cites Karen O, who she worked on the “psycho opera” Stop The Virgens with, as a major influence). It’s hard to pin down the genre Big Figment is drawing most from – prog, punk and jazz definitely factor into the layered rhythmic and harmonic elements of the arrangements.

The group recorded the album at Mama Coco’s Funky Kitchen, a fitting choice given the local punk, experimental and funk greats that have recorded at Oliver Ignatius’s new Brooklyn studio lately (The Harmonica Lewinskies, Stringer).

The second song and album single Kitty opens with a stop and start guitar section reminiscent of early Deerhoof and grows into a raucous ear candy hook of a chorus, with Jennae growl-shouting “There’s a new queen on the playground! This is the place my claws penetrate the walls! Black warrior paint for the showdown! Let my striped face be feared by all!” The song degenerates into muted clicks and clacks, string noise and heavy guitars, revealing the band’s penchant (and talent) for riot-grrrl punk tropes.

From there, the album only grows weirder, from the clicking, humming textures of psych-punk epic Bug Zapper to the unexpected soft-starter Beast, the record’s shortest tune, which features Jennae’s gentle purr over delicate guitar lines, leading into the record’s most triumphant trumpet solo. 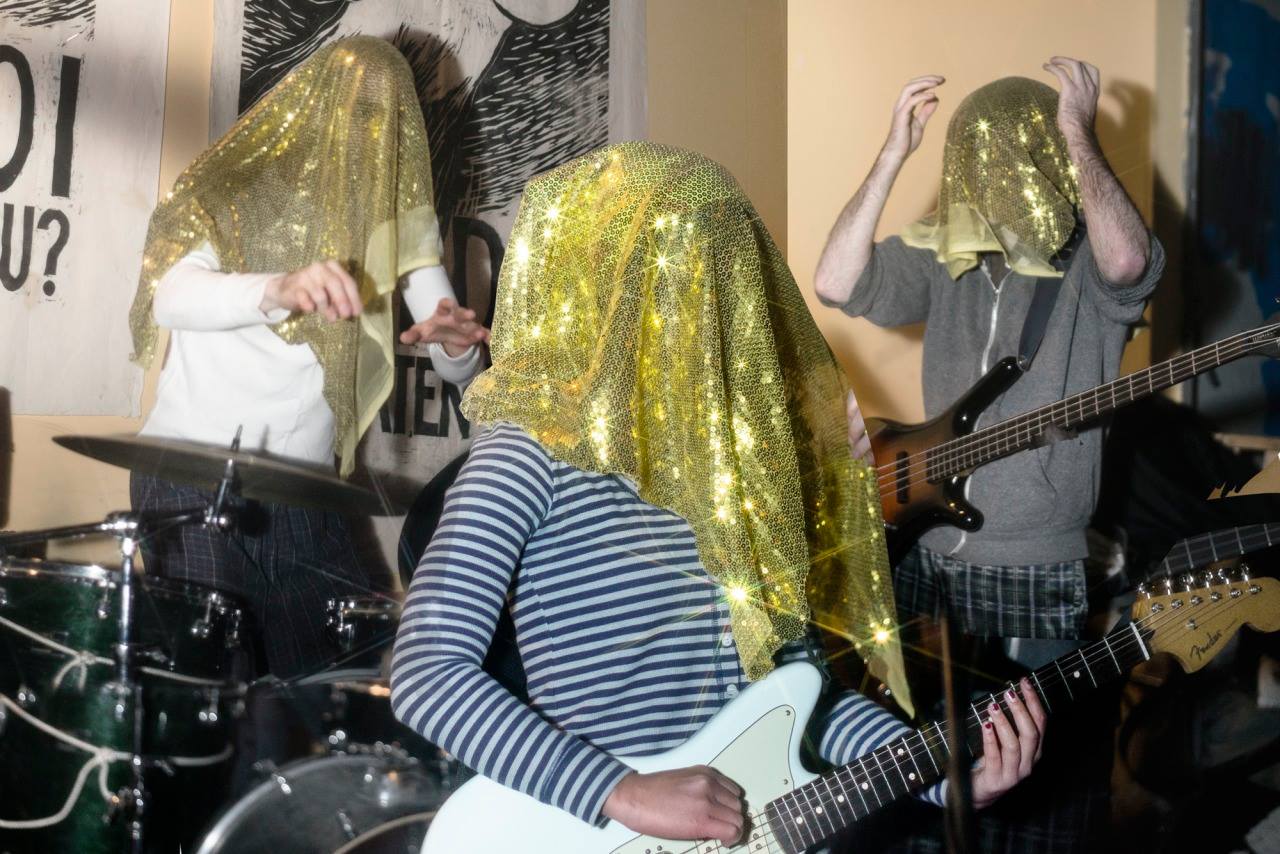 Notable throughout is the use of doubled guitars and sampling. From spoken word passages (taken from David Byrne, Frank Herbert’s Dune novels, bassist Pete Longofono’s poetry, among many others) to thunder, eggs frying, and other noises collected in a kitchen Foley session, the record expands upon the band’s already full live sound to create a new parallel universe where literally anything can happen.

On the album’s penultimate track Peekaboo, a playful call-and-response between trumpet and Jennae’s sing-songy vocals erupts over the gorgeous, melancholic love story weaved throughout (“I knew a real sad man. He kept it under covers. All I want is to soothe you…your eyes contain a forestful.”)

The closer, Cookin’ is a true dreamscape and an epic, clocking in at just over 11 minutes (keep listening for the hidden track!). Synthesizers (also played by trumpeter Andrew Linn) tangle with harsh tea kettle whistles, as an ascending guitar line struggles to reach full bloom, adding to the tension. Jennae’s vocals ascend to the heavens (or maybe down to Hades?)  as she careens “down, down, down…” into a drum solo played masterfully by Adam Pin. Synthesizers wobble, toms thunder, and we hear the guitar motif repeated with Karen O-esque vocals, into a wistful bridge: “I’ve heard the road to freedom is a long slow death. We used to be a family…Before I go you’ll all know why and what for.” The last few minutes grow into a hits section, increasing in heaviness until we hit a spoken passage chanted by the whole band, which feels like the culmination of a Bacchan ritual. When they perform it live, the whole band dances to Jennae’s whimsical choreography; always a fun finale to watch.

Chimærics is truly a dynamic album, varied enough for your smartphone-induced ADHD, but focused enough to draw a listener into the emotional journey of its mystical, anthropomorphic cast of characters. Big Figment does an excellent job of marrying technical mastery to heavy-hitting punk and prog breakdowns, making the album accessible to jazz aficionados and rockers alike. Truly a jewel of an album — I can’t wait to see what these guys come up with next.

Get the album on Big Figment’s bandcamp!