Within the last few months, the New York based genre-queer duo PWR BTTM has received significant praise for their singable songs and dazzling live performances. If you have somehow evaded the hype that surrounds the pair, or have simply chosen not to believe it, their debut LP Ugly Cherries will undeniably change that.

It is honest, anthemic, and the catchiest record of the year. In less than 30 minutes, guitarist Ben Hopkins and drummer Liv Bruce lead listeners through the tumultuous landscape of youth. They touch on queer identity, self-discovery, and the brutal reality of nights spent yearning. But by the time the album ends, I guarantee you will feel less alone than you did when you first pressed play. Just like sad boys in the ’80s needed Morrissey, anybody who has been ridiculed for embracing their true selves needs PWR BTTM. 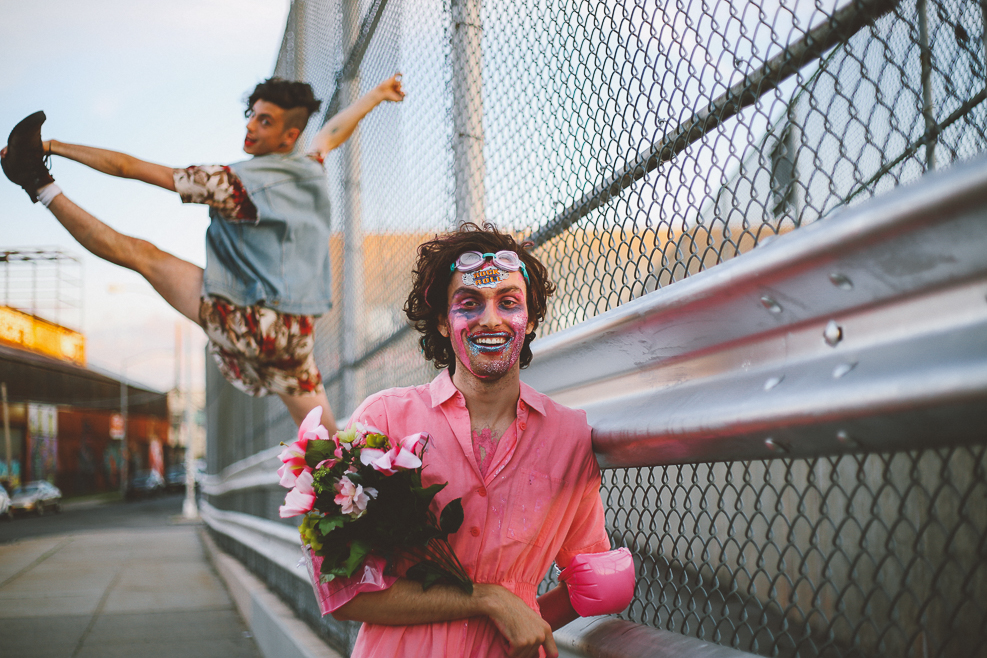 Following the opening track, the album’s standout songs seem to hit one after the other. On “I Wanna Boy,” Bruce sings “I want a boy who doesn’t want to go out shopping/I want a boy who thinks it’s sexy when my lipstick bleeds/I want a boy who can go all night without stopping/I want a boy who knows exactly what he needs.” By the end of the two minute mark, Bruce recites their college email address for potential mates, and although this gesture may appear eccentric and comical, the themes of love and loneliness prove ever-present. Those sentiments serve as a motif throughout the album, yet most vividly unfold on the track “Serving Goffman” as Bruce sings “I found out people aren’t that mean, but it still feels like they’re laughing at me/When they’re just saying hello.”

The title track–sandwiched between the two aforementioned songs–begins with a power riff that I so desperately want to play whenever I walk into a room. This time around, Hopkins takes the lead on vocals, giving a stunning performance that culminates in rattling and glamorous falsettos.

“1994” may be the best song on the album, as it truly showcases the couples’ musicianship and particularly highlights Hopkins’ range. Again, Hopkins delivers incredible falsettos and croons captivating “oooohhhs” over harsh chords and hand claps.

Slow, melancholy songs like “C u Around,” “Nu1,” and “House in Virginia” balance out the fast-paced, melodious songs on the album and they hit as hard as all the rest. All in all, Ugly Cherries is a short but sweet record with immense replay value that people will be rocking for years.

To hear the inaugural full-length from the duo, head over to PWR BTTM’s Bandcamp or Miscreant and Father/Daughter Records. For the band’s up-to-date, quirky musings, follow them on Twitter and Facebook.

Bitter by Ludlow Ejacula When I first heard “Bitter”, my initial comment was that “the vocalist sounds like Stevie Nicks” (while our dear Evan…