The other night, I went to see the band Palm with photographer extraordinaire Bella Finn Parisot. Below is a recounting of the show, and some words about their debut album, Trading Basics. 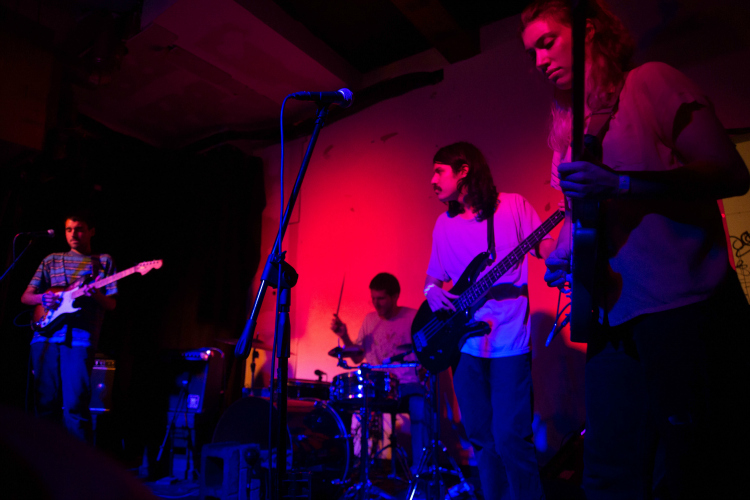 My ears are still buzzing from seeing Palm at Palisades in that warm, fuzzy way that ears can sometimes buzz. Weird circumstances, weather-wise. It’s November 6th, and it’s 70 degrees in Brooklyn, but the humidity makes it feel even hotter. And multiply that by the small army that came out to see Palm for their release show of Trading Basics — that purple room must have been about a hundred degrees. But that didn’t matter. Kasra, Hugo, Gerry and Eve were keeping the groove to their songs like some crazy multi-functional clock, and the audience was dancing along through the heat. Palm feeds off of each other, trading bucking rhythms like frothing magma, seemingly never running out of steam…

The week before the show, Trading Basics found a way to get stuck in my head. In the preceding weeks, Palm released two singles—”Crank” and “Ankles”—and then eventually streamed their album on Spin. This made me pretty happy for a couple of reasons. Throughout the week, I’d have a song in my head, only to realize that the melodies or riffs I had in my head belong to, say, “Ankles.” Or I’d be noodling around on the bass, and I’d find the first two notes to “Crank” and play them over and over again until I’d realize that Palm wasn’t about to materialize out of my walls to help me round out the song. Sigh. 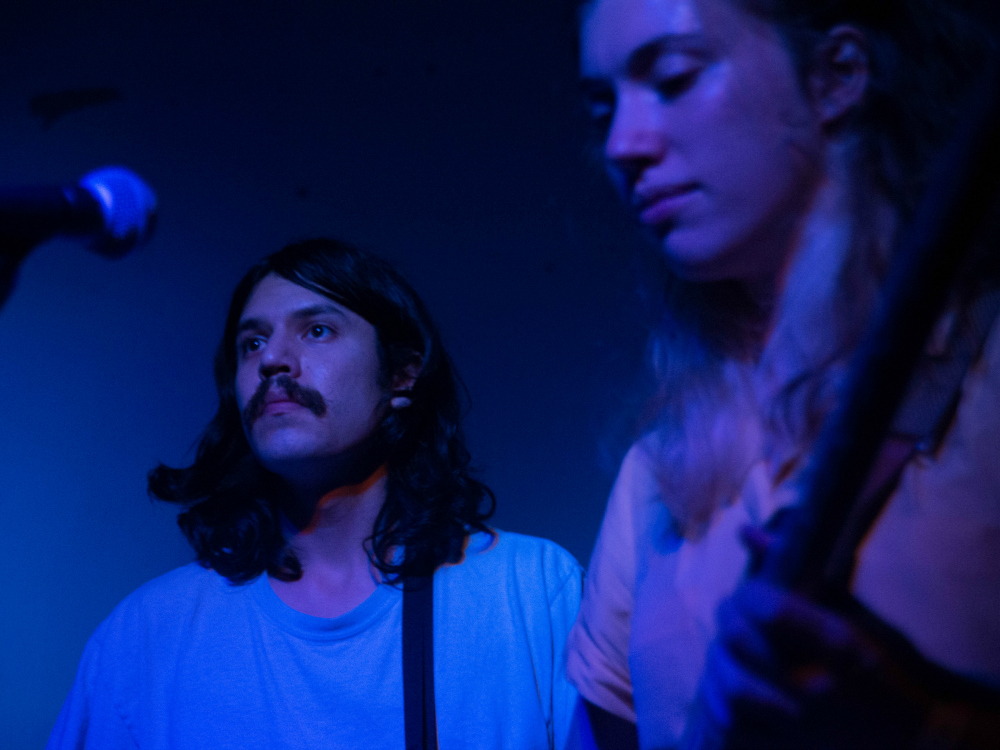 Mainly, it’s pretty sweet when an ambiguously tonal, multi-rhythmic, a-generic work is so catchy that I’m subconsciously bringing it up.

My only complaint about the record is that I want to listen to every song at the same time. As in, while I’m listening to one song, I get so psyched about the fact that I’m listening to the album, and then I think about the other songs that I’m about to listen to and—and I wish I could compress the experience of listening to it into something akin to the feeling of biting into a chocolate bar. My impatience aside, it’s an unbelievable record to get lost in. Colin Joyce (of Spin) said it right: “parts intersect, intertwine, and coalesce into brilliant patterns of biodiversity.” It puts me in the frame of mind that this album is some strange metallic jungle that I’m about to enter.

I’ll play along with that metaphor. Take a song like “You Are What Eats You.” This sneaky little instrumental piece is hiding at no. 5 on the record, and the track is positively kingly. Something about it just hints at regal inevitability, like some ancient, foreboding temple hiding behind a cliff. And the song that follows—”Egg In A Frame”—is just as exciting, with its bright sections of tonality like clearings through a brutal thicket. Plus there’s that killer line that Eve and Kasra sing, “the kind of lie you like to tell” that swoops down like a bright bird. That’s a whole world of meaning unto itself. 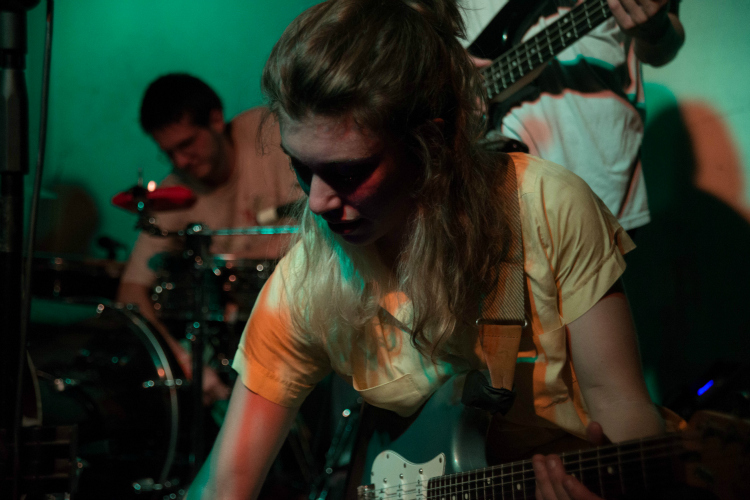 Back to the purple room: I realize that one of the things that makes Trading Basics so awesome to listen to is the fact that Palm is remarkably true to the recorded versions of their compositions. All that I said about the record applies to their live show—only it’s a little darker, a little richer, a little more raw. It’s straight up a really fun show to see. You’ll have to catch one of Palm’s live sets for yourself, I guess.

Keep up with them on Facebook and get their album RIGHT NOW on Bandcamp. 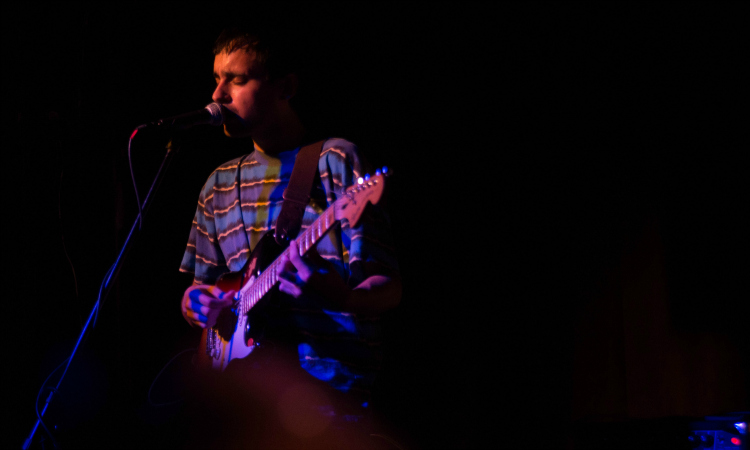 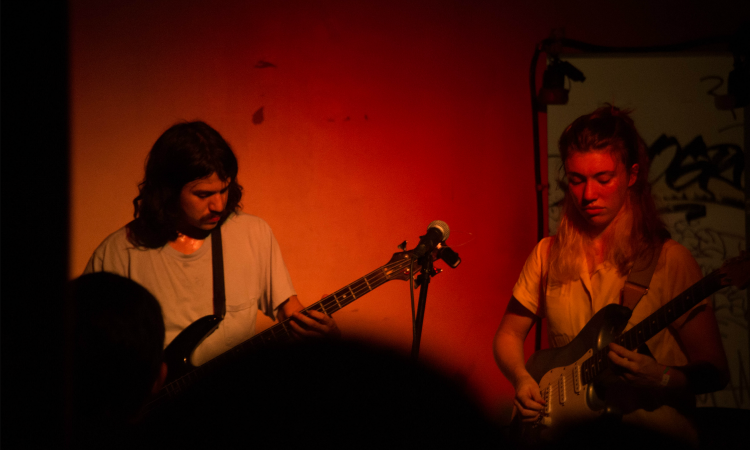 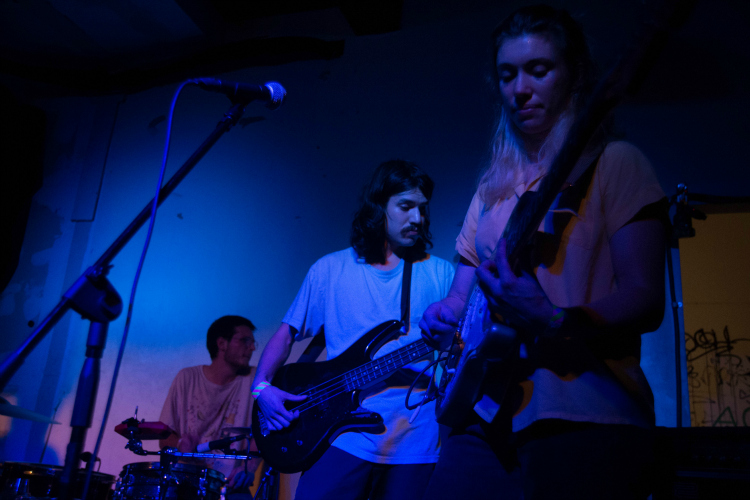 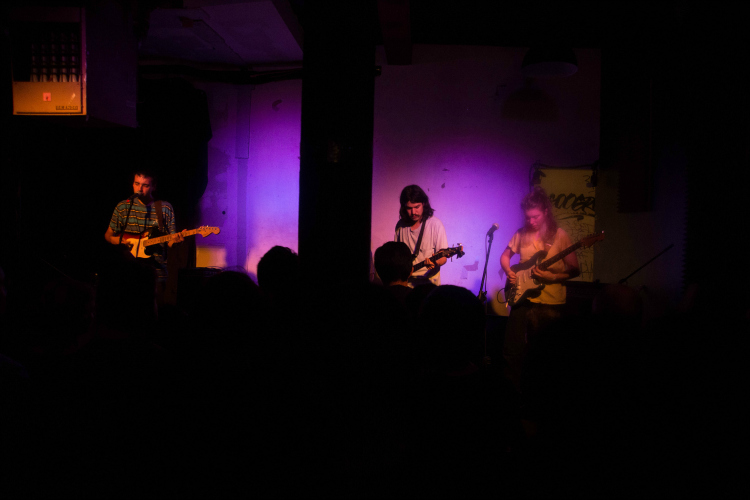