Last we heard from NYC beat crafters in Budo Kiba Collective, they were sampling Hiatus Kaiyote for Amani Fela to flow over. This time they’re back with a sentimental and upbeat track called “Dat PX,” featuring a whopping six collective members. Production credits go to m∞n (who has also done a couple of our cooler show posters), Tru-Type and mátås (who played one of our showcases in May 2015); we also have the ever-present Amani Fela, Miyachi, and Strangelove rapping, and I assure you that the mix of all these influences feels effortless. You can tell when creative people have chemistry – there’s nothing artificial here. This is the norm. Stream it up. 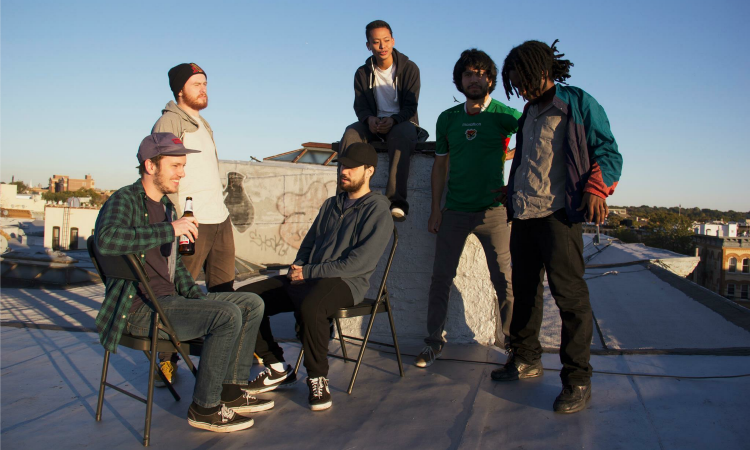 “Blessed for sense of self, a home, a place to stretch my mental wealth / No one can stress the child that got his own identity” – this line peeks out emphatically from the smooth haze of Amani’s opening verse, signaling at least another three minutes of vibe and uplifting flow. I feel that I’m in a good listening environment at home at my desk – it’s space I’ve made my own, where I don’t second-guess the first thought that comes to my head. Amani’s mentally-domestic verse (which disappears in a flood of delay) softened me up for a slightly harder-hitting lyrical salvo from Miyachi, asserting “I cook my brain until it melts” among cloying piano loops and lively percussion. Then the shared chorus hits me: “Stay exact with the focus, attract only dope shit.” It hit me at the beginning, too, but I only now realize that it’s a repeated mantra. Strangelove chimes in for the final verse, spitting a particularly rhythmic series of lines (“entropy descended relentlessly endlessly tempting attempting to prevent me from entry”) which assaults the ears in only the most positive of ways. I do like a track with a nice natural intensity crescendo, and Budo Kiba has gathered something pretty special here.

Keep up with Budo Kiba Collective on facebook and check out buy-able music on their bandcamp.

Lexington, KY producer Ellie Herring just released “Why’d You,” half of a double-single release out now via Race-Car Productions. We’re happy to have the…