BIRTH is the debut album from Brooklyn-based psych rock band Stuyedeyed (pronounced sty-died), recorded at Time Castle Studios. The album artwork is somewhat whimsical, if not entirely celebratory – this image to me is an extreme contrast to the opening hymnal thrums of the album, but Stuyedeyed pulls away from this ideological conflict with style. The band has only been around for a year and is already headed out on an east coast tour this March, which is pretty cool (see tour dates at bottom of post). 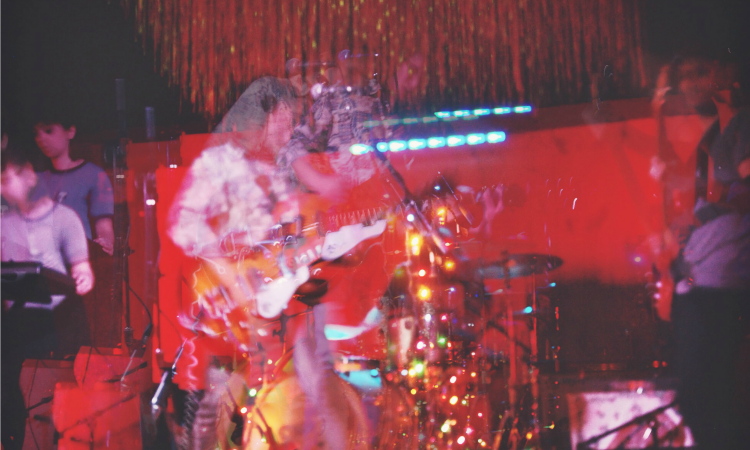 “Smut” is the song I show people who haven’t heard Stuyedeyed before – extremely slow, lazy Kurt Vile-esque weirdness suddenly transitions to an energetic psych-mess around three minutes in. John Dwyer’s presence can be felt viscerally in the delayed vocals and driving basslines, though it feels somehow a little more restrained in this environment (maybe because they’re just visiting the land of Dwyer instead of living it – I don’t blame them, as it’s already been done). The guitar riffing on “Silverado Jubilente” is wonderfully similar to classical Spanish guitar playing – perhaps this is why they dub their music ‘latin psych rock.’ It’s not quite as Zappa-esque, but I almost want to make a reference to the guitar playing of Ruban from Unknown Mortal Orchestra. Well, it happened. References on references on references. The opening chords of the final track “Old Money” confirm my suspicions that Stuyedeyed might listen to UMO – Secret Xtians, anyone?

“Desert of Judah” is one of the catchier tracks on the record, featuring the exquisite bass tones and professionally-produced double vocal harmonies which have become so characteristic of Stuyedeyed in my mind. “Miscarry On” (the track queued for first-listen streaming on their bandcamp) sounds kinda like a less grungy Black Sabbath, which they note in their influences. If there is any Led Zeppelin to be heard on these tracks (as noted in their influences), it’s a Zeppelin playing Dazed and Confused in the late 60s. It’s always great to hear a band which has both a knowledge of historical rock tradition and a willingness to innovate and combine this musical background with more contemporary experimentations. If I could describe Stuyedeyed’s arrangements in one word, it would be ‘diverse’; there’s a constant transition between quiet-then-loud and loud-then-quiet and everything-in-between. One minute the guitars are humming alongside one another as if you were listening to a buzzy guitar pop band, and the next everything has slowed down to a completely deconstructed blob of sound. There probably could be some more variation in instrumentation used, but that’s something I’ll expect from future recordings.

The most pleasant moments of the album are surely when there’s nothing but a ringing guitar or piano chord over a silent rhythm section immediately before a build-up. Sometimes I do wish that the guitar textures changed more during each song, but consistency isn’t something I can slam I suppose. Not all of the lyrics are extremely intellectual (“wake up,” “all of these faces / all of these places”), but now that I think about it, this approach is pretty effective for a haze maze type of band. All in all, this is a coherent and seasoned release from a band which is still pretty damn young. If I had one complaint about the record, it would be this overwhelming feeling of restraint, or polish in the approach to production; something about listing Black Sabbath as an influence makes me think that the guitars could have been mixed considerably sharper and higher, but hey, can’t change that kind of stuff now. Just gotta keep it in mind moving forward.

You can find more info about Stuyedeyed on social media, bruh, and you can listen to/buy their music on their bandcamp. Cheerio.

Looms is the NYC-based songwriting project of one Sharif Mekawy, and their new album Waking Days has been out for about a month now….