Polarhorse’s album Data is a fascinating incarnation of math rock and technical prowess. The Vancouver-based quartet released the album independently (!!) this week.

“The American” is an appropriately atmospheric opener. It features reverberated guitars that arpeggiate over a violin harmony and a nice backdrop of horns. This is where the drums are their most restrained and hushed, allowing the orchestral arrangement to cultivate the dreamy and expansive feels. It’s damn impressive that all of the uncommon instruments are played by band member Adrian Yee, who is also one of the guitarists in Polarhorse. He infuses his strings with math-rock sensibilities, very technical and in constant dialogue with the drums.

And holy shit, those drums. Arthur Delahooke’s drumming ranges from manic to soothing, unyielding in maintaining whatever instance of strange time signature or polyrhythm. At highly emotional moments on the album Delahooke’s drumsticks assault the snares like a hailstorm. There is also a lot of restraint in the drumming – the beats are jagged and angular when they need to be, but just as comfortable fading into the background and letting the other instruments be a protagonist. The drums are ubiquitously present to infuse groove into the music, and are definitely a solo instrument in the alchemy of the band. 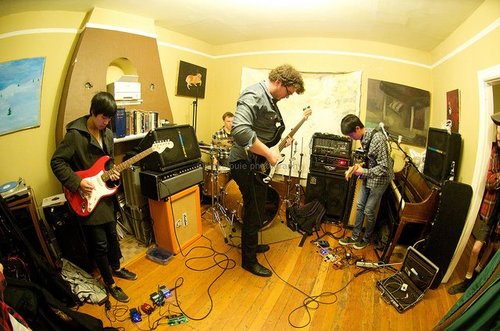 “I Dream of Insomnia” is where Polarhorse’s jazz influences show, and is probably the least “math-rocky” offering: the guitar riffs are less tap-oriented and busy, settling into a comfortable groove for longer than we’re used to. There is a period of synths and atmosphere, an uncharacteristic pause in the energy. I love the atmospheric quality of this break – we can hear the sounds of the physical recording room, quiet shuffling and drumsticks tapping together. It’s even more magnificent when the instruments come back in, reincarnated as a catchy jam of two guitars in dialogue. Shout out to Daniel Baxter on the bass, the unsung hero of the album. His basslines are equal parts technically impressive and imaginative, meshing neatly with the drums and really driving the time signature changes.

For an independent release, Data is massively impressive. Within the 6 tracks on Data there are many microscopic songs: sections of instruments or time signatures that form the metamorphic backbone of the tracks. It’s difficult to describe any song as a unit because the fluidity of the tracks is too difficult to grasp in a closed fist. As difficult as it is to describe instrumental music, there are experimental elements in Data that make it more tangible journey through outer space.

Math Rock is a technical medium by virtue. Perhaps this is most evident in “Bob Marley’s Tesseract” (a tesseract is a 4D cube analog), in which a British accented voice (Richard Dawkins?) says “Science is interesting, and if you don’t agree, you can fuck off”. Math rock, at its best, isn’t just a circlejerk over technical ability or micro-beats. It’s energy. Youthful, nerdy, primal energy. The tracks are fractured, the ghosts of jam sessions past. But ultimately, everything meshes together and the whole thing results in a very well-structured, incredibly complex release.

You can pay what you want for their music on Bandcamp. You should also vote for Polarhorse in this online battle of the bands competition, where you can check out a sweet video of them playing live and obliterating all of the other participating bands.