Crazy, Nice, or Fancy is the debut LP from Perfect Teeth, a jangly Greenpoint 4-piece indie rock outfit that self-describes as both “slack rock” and “an american band.” Perfect Teeth played a slew of shows with Slackgaze-affiliated bands such as Doubting Thomas Cruise Control, Sunset Diver, and Bodega Bay before going on hiatus at the end of 2014 (in fact, BB frontman Ben Hozie drums in Perfect Teeth and all PT members have played in BB!). PT is made distinct by varied and fluent alt-rock songwriting tropes, ubiquitious energy, and really pleasant and feels-y vocal harmonies. 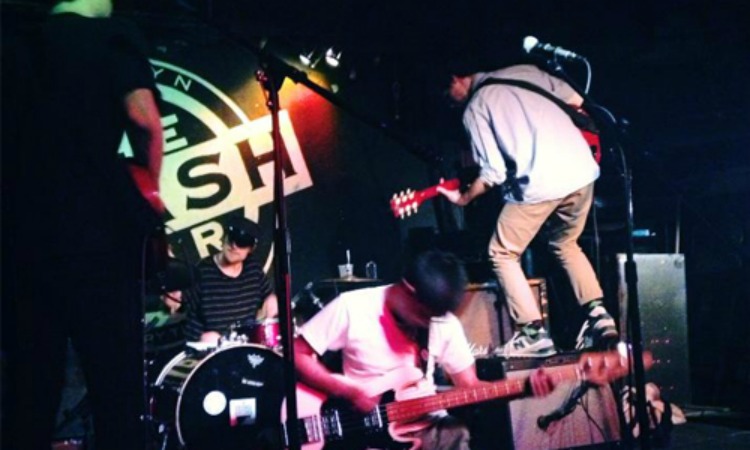 Gritty guitar textures (chunky rhythm guitar chords, blaring alternating single-note leads) introduce the chords of “Charlie Rose,” making room for the vaguely punk-influenced vocal melody to be drawled over the instrumentals. The vocal style actually sort of reminds me of Motion City Soundtrack, but the lyrics are a lot better on average than any MCS song (“where are you now? a bigger wooden table / out in the black / they’re turning on the bright lights”) and the music is more gnarled and, well, musical. I keep realizing that I like Perfect Teeth’s shortest songs the best – this isn’t a condemnation of the longer tracks, but simply a personal observation about the happy pairings of brevity and poetry. It seems better to wonder about the subject of the song than to know exactly why he or she will end up on PBS daytime TV.

“Memphis” begins with the same guitar layering we’ve become accustomed to by this point, but makes the listener chuckle immediately with its opening line (“You’re so fucking dumb”). The repeated hook from this song (“put it put it put it put it put it in your pocket”) is probably what will be stuck in your head in the post-listen silence if you’ve listened through all the tracks. I’d put money on this. I’ve grown to really enjoy the half-narratives that are built over the course of Perfect Teeth’s lyrical expeditions, conjuring images and emotions but not quite full characters or scenarios. My favorite part of “Memphis” is actually the distorted harmonic weirdness at the end (guitar and keys made these sounds, I think), a much-needed deconstruction of one of the many clean vocal-hook-based numbers on this album.

The introduction to “Magnet” brings a welcome change of pace, opening with a slow drum click and bare bassline to contextualize the love-song that it in fact is (“I always find myself / drawn to the nape of your neck / like a magnet”) before jumping back into energetic alt-rock grooves for the chorus. Listening to this song fills me with hometown nostalgia and memories of the introverted, teenage yearning for companionship (“wish I had the time / to live here all my life”), and Perfect Teeth prove themselves to be self-aware by immediately relating themselves to the 90s bands that I probably would have been listening to while I had these feels (if I was a few years older, at least).

nirvana and sublime
all those 90s bands, yeah they’d all be fine
as words to describe
all the feelings that I get when I’m
sticking to your neck, to your neck
like a magnet, like a magnet

All in all, Crazy, Nice, or Fancy is a thoughtful, catchy, and pleasant listen-through which pays homage to traditional alt-rock tropes while simultaneously inserting a breath of fresh air into my conception of its genre. Energetic, tongue-in-cheek, and well-crafted. You can buy the digital album on their bandcamp.

You’re sitting sunken back at your desk at home. Or maybe you’re on the couch, feet up on the coffee table after a long…