Modern Vices are a frantically energetic band of strapping young men hailing from Chicago who initially caught my attention via fellow Chi-rockers Twin Peaks’ twitter account. Of course, this blurb would just write itself if I lazily compared the two bands in checklist fashion and cross-documented all their similarities. It’d also be lazy to compare the Vice-boys to the Strokes or the Hives or some other recent successful guitar pop band, so I’ll steer clear. 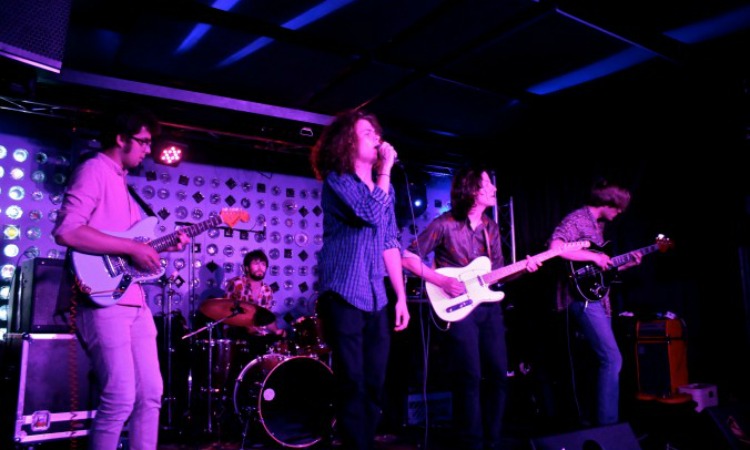 Lead singer Alex Rebek (one consonant sound in his last name removed from the mustachioed Jeopardy host) uncannily channels the dark brass baritone of former Misfits singer and solo artist Glen Danzig, a warped sort of Jim Morrison delivery with slightly more abandon and a throatier vibrato. It’s a markedly vintage style – although it’s been beaten to death – which manages to sound novel over garage-y licks and busy cymbal flourishes.

In October, Modern Vices released their S/T full length debut through Autumn Tone records, the same label which pushed Twin Peaks’ Sunken out into the world a few years back. While the album is slickly produced and captures a different side of the group, it’s my personal feels that a studio setting kind of restricts a band like this from really letting it rip. My evidence for this opinion is the 3-track live cassette the Vices put up on Soundcloud barely a month after their album release. The more desperate tempos and brighter overall sound seem to work in the band’s favor, especially on “Nothing So Cold,” one of my personal favorite tracks. I interpret this as a testament to the quality of Modern Vices’ live show, one which I am very excited to see once they make it out east.

Watch the video for “Cheap Style” below:

Cumquat is Kevin Sullivan, Philadelphia-based manipulator of found sounds and synths alike. His newest track, “Cucumber,” strikes me as at once wholly human and…