Last time I wrote about Frog, they had just released a music video for the first track of their new LP Kind of Blah. Luckily enough for all of you kind readers, the full album has now been released in its entirety on bandcamp via British label Audio Antihero. My opinion of the new record in two words: BUY IT. If you need more persuasion, feel free to read on. 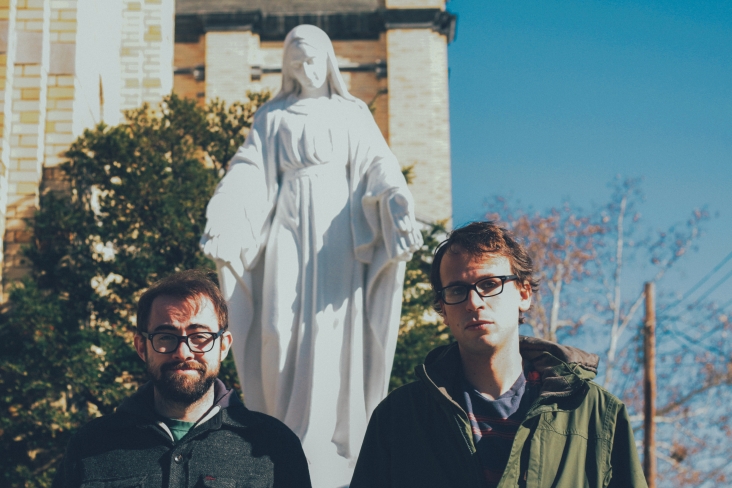 “Judy Garland” is the track I always show people first, so it makes sense that it was the lead single for this album. It’s idiosyncratically Frog in many ways – muted rapid guitar picking, subtle fade-in synth pads, lyrics-so-fast-you-barely-caught-them. It hits a weird spot between alternative pop (Modest Mouse-core) and traditional folk/American country tropes, a spot I never knew I needed but now can never give up. Really though, I don’t have words to capture the elation this track can grant its listeners, so I hope you’re already listening to it. I’ll let the lyrics describe the track for you:

jesus couldn’t quell the pains of americas in trucks and trains and tractor trailers on the range barmen counting their change and goldwin mayer fred astaire slicking back his oily hair snort benzedrine off of a mirror, slaps her ass how are you dear and all the preachers whistle nervous stare down devils in the back of churches, meet their luscious daughter in the smalls beneath the boughs of birches

If I had to describe this record in one word, I would call it a chameleon. On the first track, a seemingly arbitrary synth chord opens into a more traditional alternative lyrical focus with a key change, and the track finishes by shifting back up into the synth tone key. The end of “Photograph” features some oddly twinkly textures which come out of nowhere before the track fades; on almost every song on the record, synth pads have been tucked carefully into the seams between triangle hits and lickety-split guitar picking and harmonized vocals. Frog refuses to stay in its niche. When approached from a different light, the color palette that the duo paints with appears to transform itself just as its listener begins to adapt to it and make intuitive predictions of what the next hit or key change will be. It doesn’t do so in a distracting way; indeed, the shape-shifting tonal nature of this album is merely one complementary aspect to sharp and well-crafted lyrical hooks and aesthetically pleasing song structures which often involve small tweaks from long-lasting formulas.

As I’ve written before, “All Dogs Go to Heaven” (track #1) begins with a tripped-out sequence of four notes played on a synth which are then slowly bent downward into the tonal background of the rest of the track as a soft jangling guitar texture enters. Lyrically, it begins the series of juxtapositions which will continue through the rest of the album: dreamlike, nostalgic (pre-?)Internet era scenes, sexuality as a signifier, and Jesus. We get a bit of this in the very first verse: “if all dogs go to heaven / and all dames ache for Daniel Day / fuck with me darlin’ and I’ll make you pay.”

To jump around a bit, “Fucking” is indeed the closest thing to (or most straightforward depiction of) an amphibian body-rubbing session (wet petting?) you’ll encounter on Kind of Blah – we get the teenage bodily frustration sentiment (“Diet cokes in supple throats you cum in ropes you need to see her”) neatly interspersed with a somehow more existential statement (“fucking all of the time / out of sight out of mind / racing towards a decline”). Frog’s attitude towards sexuality (which seems clearly infantile, or at least at one point it was) is a curiously tongue-in-cheek affirmation of the “old dirty magazines…burned with kerosene” (these words are from track #5, “Everything 2002”) by American repression of sexuality and the sadness and frustration which fills us in its absence. I couldn’t have put it more beautifully myself:

“Wish Upon a Bar” is a more melancholy number, complete with fingerpicking and weepy synth melodies which fill up quite a bit of space given there’s no percussion in the verses. The refrain is indulgently sorrowful (“don’t tell me where you are / don’t send me holiday cards / i’ma drop dead drunk on the fdr”), but on its second repetition we’re treated to the muffled laughter of Frog’s two band members. It feels almost like I’m being laughed at (not maliciously, though) for letting myself be brought at the point of tears – time has passed, and perhaps it’s just too early in the record to be wallowing in sorrow-nostalgia. The following track has a sort of delayed confirmation in its chorus (“it’s just a photograph […] / it’s just a furtive stab into the curtained past”); though Frog is talented at evoking past sadness, they are clearly even better at transcending it.

I could go through and do more track-by-track lyrical analysis, but fear of being reductive or too big a fan of my own opinions drives me to wrap this review up here. Though some tracks are perhaps less immediately memorable than their counterparts (I’m looking at you, “Everything’s 2002” – an interlude-song which happens so quickly that I always think it’s just the second half of “Photograph,” though that probably isn’t a bad thing), Kind of Blah succeeds in being a multi-faceted, consistent, and time-tested alternative pop album which will surely hook more listeners than ever before. This record is a specific amalgam’s approach to the American love story, a swamp-residing foot-stomping partner for the young boy frog’s wistful interiority on lengthy public transportation journeys.

You can wipe the tears from your eyes and buy Frog’s album on bandcamp, or keep up with them on social media.

Studies show that listening to classical music while studying or taking exams can be extremely beneficial. There have been no studies, but anecdotally, listening…