NYC art-rock outfit Bodega Bay just released its first full length LP Our Brand Could Be Your Life, and as you might have already guessed, it is a poignant commentary on the state of Brooklyn DIY. These cowboys of the underground Brooklyn music scene are months into a theoretical coup directed at the very core of the capitalistic art industry hive mind which keeps Brooklyn venues afloat – with songs like “Performance,” “Network,” and “Webster Hall,” we’re treated to a disgusted panorama of experience which should be pretty familiar for anyone who’s tried to ‘make it’ in this weird and dehumanizing place. Bodega Bay doesn’t just let this disgust float; the spectator is invited to participate in the destruction of the spectacle, which is somehow both glorifying and empowering to the spectator. But I’ll keep exploring this below.

“Cultural Consumer,” the title of Bodega Bay’s first two-track demo tape, has been expanded here into a four-song suite which I’ve actually heard quite a few times in a live setting. It’s been smoothed out a bit for the album version, with more acoustic textures and soft singing to balance out the grittier moments which already happened on the LP (Cultural Consumer I is now track #29, not track #1). This one is perhaps the most sing-along oriented to anyone who’s just discovering the band for the first time; I remember blasting the demo version in my living room and witnessing my friends eye-rollingly mouth ‘CULTURE… IS CONSUMED’ along with the chorus. At this point, when I sing along, it’s not ironic. At all.

The second track of the LP (moving back in time, here) is actually in direct conversation with my sing-along tendencies: “There’s no time left to sing along” is the primary hook of “Bodega Bait,” a 44 second track which doesn’t slow down to let the listener catch up. Bodega Bay resists attempts at traditional likability in a coy way which is also somehow endearing. We will discuss this sort of meta-gimmick again in further detail soon. Keep reading and listening, babes.

“Stain Gaze” is a shot fired in the direction of a generation of performers who exist behind a layer of spectatorial separation, maintained by artificial industry components like used-to-be-indie record labels and managers and booking agents. I will say that Mike Sniper is a pretty easy target, though (I’m using puns to keep you awake, dear reader). We even get a sort of wailing sonic addition to the usual Bodega Bay bassline/3-to-4 chord guitar progression/floor-tom-and-snare-drum beat to simulate My Bloody Valentine-esque shoegaze jams, which is a nice change-up and evidence that Bodega Bay are keeping their sonic and lyrical ideas closely related.

Mic check. Bertolt Brecht. Establish discourse between rock and pop and spec.
Shoe gaze. In a window display. The Captured Tracks are there to help you bliss out when it’s time to pay.

This is the track that ideologically sold me on this album. “Every single night go to shows. Texting on the john at your job. Waiting room at the hospital,” Ben crows, reminding anyone who’s ever booked a show that there are probably events going on RIGHT NOW that could be attended for networking and brand-building purposes. When a scene is based on hype and how many heads can be packed into a sweaty, overcrowded basement that’s too far away from the nearest subway, event organizers are pretty much obligated to be out getting in a good word with the most popular bands (uh, sorry, I mean, obligated to be out experiencing art, right?) if they want to make sure that their brand survives until the next event. In a city filled with trust fund babies trying to ‘make it,’ this boils down to a contest of gimmicks, social capital, and pay-to-play power. The first No Smoking event (which Bodega Bay participated in!!) was called “Munchies” for a reason – we lured in possible event attendees with the promise of free food to make up for the hours they’d spend standing in a crowded room as their friends hit drums and stuff.

Personal branding is not just a web 2.0 idea. You want to make sure you’re building your brand in the REAL world. 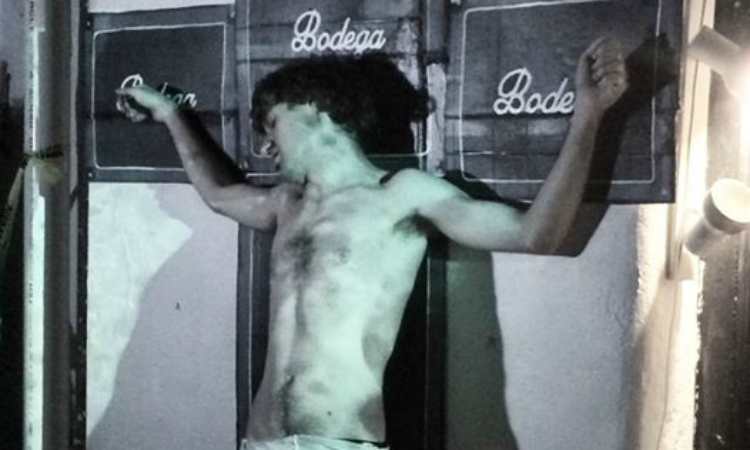 I’ve reached the point in the review where I have to stop idol-worshipping this band and actually turn a critical eye toward some aspects of this album. My first complaint, I guess, seems to be a bragging point of Ben’s – every track on this album was recorded either directly to the laptop (DI) or using a laptop microphone. The sonic focus of the majority of this album seems to be rhythmic and vocal, not textural; after an hour’s worth of listening, even the most minimal of lead tracks (“Stain Gaze” and “Girls Have Needs” include some nice melodic layering) goes a long way for me as a listener. I’m used to listening to records which try above all to sound full, rich, and varied. Bodega Bay seems more interested in cultivating a lo-fi (“no-fi”) aesthetic/ experimenting lyrically than they’re interested in textural experimentation/deviation. Early on, the band condemns the Bandcamp listening experience as “digital complacent sap rock,” but I wonder where the layer of separation necessary for criticism can reside when Our Brand Could Be Your Life is a Bandcamp release recorded entirely on a laptop. I can’t decide if I would like this band more or less if they’d recorded to tape instead of DAW with fancy vintage guitars and effects pedals and dozens of full-sounding layers.

The gimmick of Bodega Bay is anti-gimmick. Since their live performance places most of its emphasis on spectacle (indeed, it’s a crazy fun dance party which deviates from a crowd’s typical expectations for a DIY show), I can’t help but note that a bunch of the capitalist spectacle critique they engage in is also probably applicable to them in a sort of sideways manner. I give them a lot of credit for only charging $5 for their release show, though. Clearly Bodega Bay exists to point out things it wants to change in a flawed system; even though it might be possible for me to pinpoint hypocrisies, perhaps it’s more productive to address the necessary evils of participating in a flawed system. In other words, if Bodega Bay had no gimmick, I wouldn’t even be writing this album review.

So, without further ado, I present to you the track that is the most sincere and musical (in my opinion):

I reviewed this one over six months ago, so I won’t spend more time dissecting it and its references. I will say, though, that this track has perhaps the best balance of lyrical charm (“Tapping your Teutonic thighs. Spinning records in your eyes. Dizzy when I cuffed you”) and sonic pleasantness; there are a few tracks on here which seem to add a lot to the anti-capitalist narrative, but little to textural or formal variety. In other words, “16×9” is my favorite track because there’s an emphasis on it actually sounding good as well as being smart and tongue-in-cheek.

Will I ever forgive Bodega Ben for not liking Tame Impala? That remains to be seen. Bodega Bay is ultimately a message band in my mind – I probably don’t listen to many of the bands that influence them, but just to keep the Tame Impala comparison going, I think it’s fair to point out that Kevin Parker spends most of his recording time perfecting the textures and loops on his albums. In a Facebook conversation, Ben lambasted Parker as the sort of lonely genius typical of 2015 music distribution – one who sits alone in his room and records an entire album to his laptop without any help from perfectly useful and talented bandmates. Parker’s music is also the farthest thing possible from meta-commentary. It’s pretty typical pop music lyrics set to dance-pop grooves. I think perhaps the root of the animosity is that Parker is completely uninterested in making a lyrical statement about anything but his own introversion, and that’s a valid criticism. White dudes should be mindful of why and how their music gets popular, and what that says about the world. But I don’t think Parker went in for the hype, you know? He makes music to make good-sounding music. Bodega Bay (as far as I can tell) make music to make a statement about a scene which is gradually becoming vile to participate in. I’ll start to wrap things up here, though – this is a long-ass review, and by this point I’m talking about a Facebook argument instead of the music itself.

When I pay for an Uber these days, I end up getting “Yuppie Take a Cab” stuck in my head. Since there are 33 tracks on this album, I didn’t get to discuss some of my favorite, most catchy tunes – if you’ve gotten this far, definitely check out “Tarkovski” and “Memphis” for some great sing-along moments. Sometimes the no-fi quality is a little monotonous; sometimes I just don’t feel like dwelling on the sad state of NYC DIY. But most of the time, I find Our Brand Could Be Your Life to be a rollicking roller coaster ride of sardonic, entertaining, and compelling narrative commentary which manages to be both intelligent and unpretentious.

You can keep up with Bodega Bay on social media (what’s their net worth?) and stream the rest of the album on bandcamp.

Listening to your band on Bandcamp is never really satisfying. Slouched in front of desktop.
Makes mediocre rock pop.