WOOF. is the solo recording project of New Jersey-based multi-instrumentalist and singer Kelan Bonislawski. As the story goes, Kelan spent years gathering and messing around with various instruments and pieces of recording equipment before he realized that he had enough equipment to record the sound of a full band all by his lonesome. As his bio says, these recordings “developed into a collage of sounds from Beck-esque lo-fi funk to early 00’s indie rock” (with occasional detours in “dense psychedelic space”). WOOF. recently signed with Tree Machine Records, and they are collaborating to release this self-titled EP on this very day. Tree Machine calls it “the latest project to grasp electronica-inspired indie-pop by the metaphorical balls and swing it towards the ceiling of otherworldly goodness”; I’ll explain why this is a true statement. 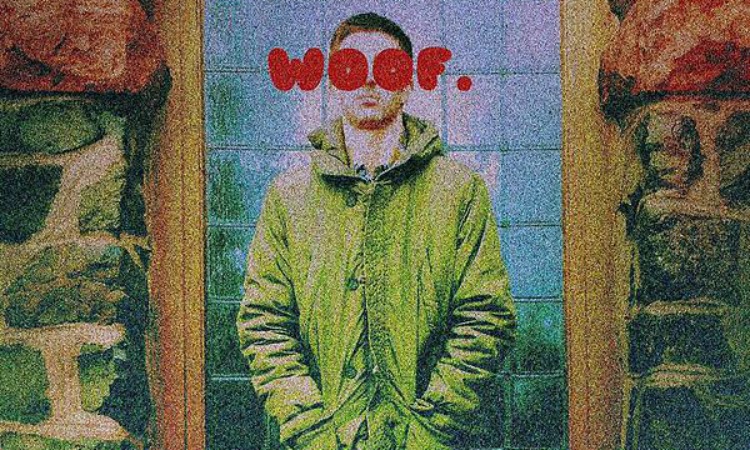 “My Device” is a pretty predictable song topic in the age of proto-cyborgs (that is to say, technology-addicted millennials who have no history of offline experience), but Kelan handles the topic with artistic ease and a welcome burst of levity. It opens with a juxtaposition of dissonant guitar tones and tinny dialtones before harmonic guitar-strumming opens the song up into an alternative-pop type verse which deconstructs our modern life and times. I have no qualms singing along with a chorus like this one (“my device is my whole life”) – there’s an intersection between irony and charm somewhere up in here.

without my device, what am i supposed to look at
how will i know which friend is trying to call me
how would i even find my own way home
this life is nice but it’s so fucking distracting
how can i get my face out of this phone

“Not to Offend” reminds me of Unknown Mortal Orchestra in the style of singing, guitar tones, and simplistic but driving and catchy rhythm orchestration. It’s a more laid-back sonic excursion than the previous one, featuring wordless vocal harmonies and spacey guitar-driven bridge sections which provide the track with some welcome textural variety.

The video for “I Got Away” features alternating shots of lighting, nature, and what seems to be an edited shot of ink flowing through a liquid medium set to twangy guitar hooks and an irresistible vocal refrain. A grainy display flickers back and forth between 1/2/3/4 in predictable fashion, then begins jumping around out of time and numerical sequence as a psychedelic breakdown opens up the middle of the track. The sun sets in the nature shots, and the vocal hook returns, accompanied by more trippy visual effects playing with the name WOOF. itself – a pleasant viewing experience, for sure.

“Certainty” features some extremely smooth production, mixing what sounds like palm-muted guitar picking with Todd Terje-esque synth streaks and ambient padding. The track opens with totally disjoint synth bloops, but after a few seconds of weird listening the rhythm tracks are introduced alongside the bloops to contextualize them harmonically and rhythmically. This is easily one of the most original and forward-thinking tracks on the album (or at least where I have the most difficult time of pulling up relevant bands to talk about).

I could continue deconstructing the album track-by-track, but I can feel my method becoming less and less efficient as I progress. (“2am” is a dreamier tom-driven number; “Hear Me Breathing” is a surprisingly short track with a shuffling straight-eighth beat and warbling, crunchy guitar textures.) WOOF.’s aesthetic is legitimately difficult to describe – ‘different wavelength’? ‘Grainy post-pop lo-fi jams’? I’m not entirely sure how to do this EP justice in a linguistic sense. To isolate Kelan’s songwriting from his orchestration feels sort of ungainly as well; the smartness of his lyrics is striking when you experience his vocal delivery and instrumental arrangements simultaneously, but it loses a little power if it’s pulled out and stuck on the Internet in raw text like some sort of faux-endearing free verse.

So, you want a summation of WOOF.? Think about a dude who listened to Washed Out and Animal Collective, then went home to a room full of guitars and made an alt-pop album. The last track on the album, “Apophenia,” was my final clue as to Kelan’s interest in electronic music; the plinking of the arps under spaced-out distortion-guitar tracks is the EP’s perfect summation, I think. What I’m trying to say to you here is that I could give you a press clipping-worthy statement about the album’s nature, or you could just listen to the damn thing and form your own opinion. Real art doesn’t just speak for itself, it screams into the mic and then drops it. Stream the whole thing below, buy it on iTunes, or stream it on Spotify!