Underwater Bear Ballet is a fuzzy rock quartet based in Boston, and their name is an excellent descriptor of their drowned-out psychedelic jams. Their most recent release, the Couch Surfing EP, was recorded at the Mystic Valley Studio and came out a little more than a month ago. They self-describe as “stoner prog” and pretty much neglect to give themselves any sort of snazzy tagline whatsoever, which I’m pretty okay with. Sometimes people should care about the tunes they make before trying too hard to market ’em. 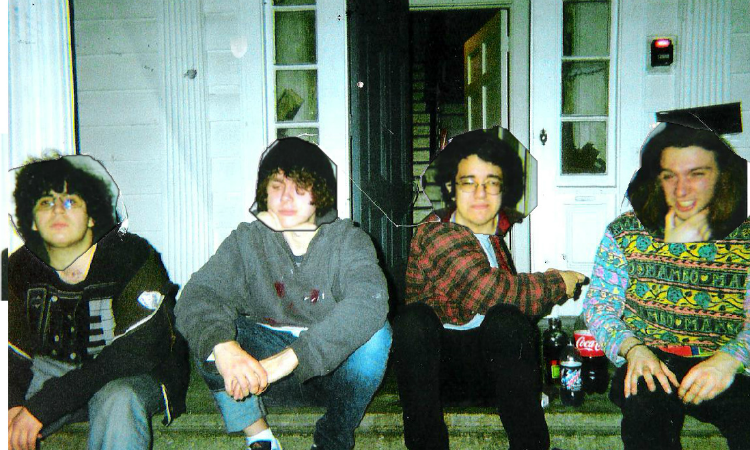 I saw UBB live at a show I played with them in Boston, and man did they ever open up that night with energy. Dan, their keyboard player, is pretty much virtuosic – during “What’s Your Pleasure?”, his synth playing gets really nuts and I saw some dude trying desperately to shove his fingers in his ears to prevent permanent hearing loss. I relish the idea of UBB making such a permanent impression on my senses. Anyway, to the album.

I find “Naked in a Plastic Coffin” to be kind of a weird starting point for the EP – it combines aspects of melodic prog with an almost pop or pop-punk vibe, whereas I found their live sound and the rest of the EP to stem from a sort of general blues influence. “You try to cut me up, then you say it’s all ok,” Aidan calls out coyly, his voice sort of difficult to pick out from the happy-go-lucky shared synth + bass part and jumpy guitar track. The grainy vocal quality kind of fits the vibe of this EP, but I sort of expect an increase in vocal fidelity for future releases from UBB. It’s one thing to use a good mic and put it through some pedals or post-production, but it’s just plain difficult to hear the vocals at all (not just a lyrics thing). There’s some pretty crazy guitar shredding followed by a vocal breakdown (“I shouldn’t feel this way but I kinda like the pain”), which reminds me pretty strongly of Foxygen.

“Abilify” begins with a low growl of guitar power chords, followed quickly by a driving bassline and a feedback loop. The entrance of the lead guitar reminds me of a lot of things all at once, but no particular association rises above the rest (meaning that I’m not gonna bother with references). I feel like I like this band best in instrumental segments – their breakdowns and freak-outs are pretty much unmatched by any other guitar band I can think of, and they show impressive restraint in terms of how quickly they go from 0 to 100 with ’em. The vocal segments tend to be sort of unconvincing or indistinct in comparison to the instrumental arrangements. No one ever listened to Phish for the lyrics, anyway. “Bluntz” features this one drippy guitar lick which literally does sound underwater. I’m pretty some other people who were at that show I saw also described the band as “underwater” without even knowing the band name – you really gotta hand it to ’em for knowing what to call their sound. The track also begins with some really nice muted synth burbling, probably one of my favorite moments on the album. That same synth part fades in and out in the background for much of the remainder of the track, a neatly padded element which helps glue me to the track and glue aspects of the track to each other. I do feel like it’s a little self-indulgent, but hey, jam out.

“What’s Your Pleasure?” is a jangly and relaxed number, with Aidan drawling the name of the track after just a few seconds of guitar-lick-intro. “We have some sights to show you,” Aidan declares, and then his voice fades into a high-pitched and weirdly (not heavily) distorted guitar riff. This track also features the synth freakout I mentioned before – I won’t describe it, I’ll just say that this is one of my favorites on the EP and you should definitely take a listen. The title track for this release is also one of my favorites – guess they expect listeners to stick around for the duration. I can’t guarantee that many listeners will, but when that certain (AMAZING) type of listener stumbles across Couch Surfing, he or she will have a great time. This track has a sort of a spooky, Halloweeny vibe – self-indulgent again, but maybe I’m just a sympathetic listener for this type of stuff. “Seep” is a perfect closing track for the EP, moving away from the blues or jam feel and toward an almost post-rocky or post-psychedelic one. “I am breathing you in, all you are and all you will be” is the opening line of the track – trippy and satisfying. The EP ends on a harsh note with the band playing one of the heavier riffs on the whole album and Aidan screaming incomprehensibly into the mic before it fades into silence.

I’d definitely say that this record shows potential in terms of composition, originality in terms of texturing, restraint, and a decent number of production problems that the modern listener has to constantly ignore. If you gave UBB $3000 and a nice studio, I’m sure they would make one of the danker chunks of psychedelic music to come out in the early 21st century – as for the Couch Surfing EP, I repeat that it shows signs of potential. My advice for next time would be to try a new studio and to make friends with a super trippy illustrator for the album artwork, heh. I had an amazing time seeing UBB live, I’d definitely do it again whenever I’m able.

You can keep up with UBB on social media or stream their tunes on bandcamp.