Dead Mystics is the 2nd LP from Bloomington-based neo-psychedelia group !mindparade, a precise and varied foray into the weird imaginary of frontman and curator Alex Arnold. They are doing a limited run of 100 orange vinyls via one of my favorite labels, Tree Machine Records, which you can grab right here. Fans of The Flaming Lips, Ty Segall, Jacco Gardner, and even Neon Indian will find a lot to like with Dead Mystics; it’s a synthesis of modern glitch production and classic, anthemic pop-rock tropes that still manages to forge its own path into weird, timeless psychedelic jams. Don’t just take my word for it, though – take a listen below! 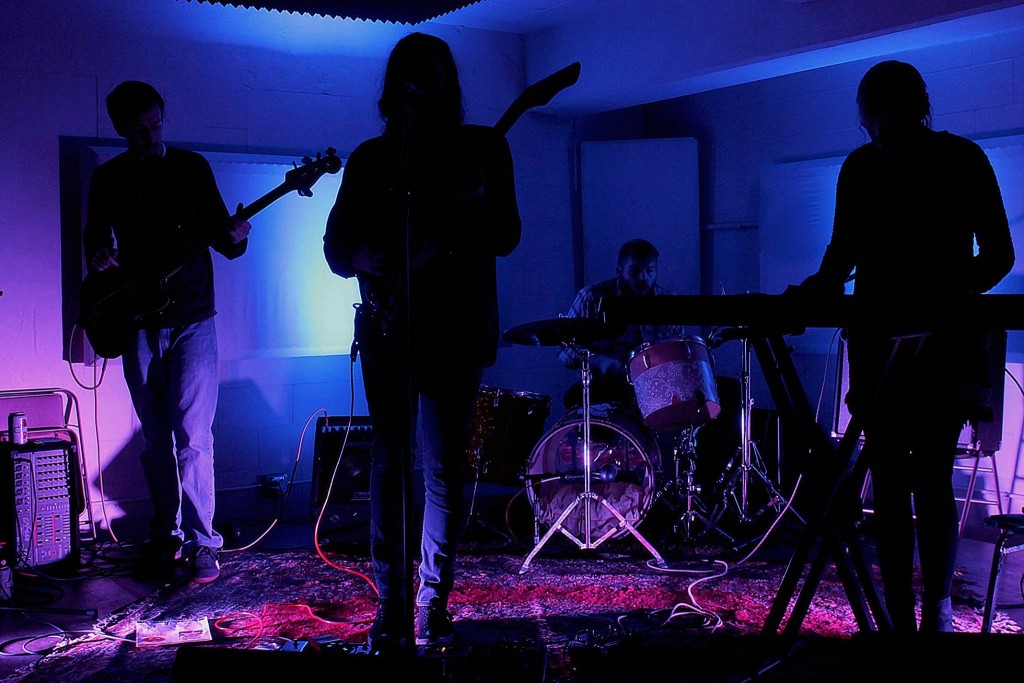 “See You” is both a misleading and not a misleading opening number. From its first notes and rhythmic clicks, I would have placed Dead Mystics as an album that aspired to be somewhat like Neon Indian or Washed Out, but now on re-listen I think of it much more like The Flaming Lips. It’s anthemic yet groovy, relaxed yet sort of simmering-ready-to-boil-over underneath the chill exoskeleton. Despite its short duration, “New Beginning” seems to be one of the more creative and catchy numbers on the record, with a money-chord guitar lick at the center of a chorus surrounded by glittery synth textures and the very much in-vogue hazed-out psychedelic pop vocal delivery favored by groups like Foxygen (Diane Coffee comes to mind in particular).

Of all the tracks on this record, “What It’s For” reminds me most strongly of Jacco Gardner, perhaps as a result of the staccato guitar work and spacey, lilting synth pads. “Somehow Part I & II” is easily my favorite segment of the LP, forgoing accessible melodies and jaunty rhythms for a slow, Beatles/Zeppelin/Tame Impala-reminiscent introductory ballad (?) featuring Alex’s melancholy vocals (“hello again my dear”) amidst carefully-selected keyboard textures. Here more than anywhere else, !mindparade proves its capability to appreciate beauty and truly captivate. I guess I’m a sucker for ambient music. Part II develops into a more talk-singing synth number with what sounds like a drum machine keeping the beat (but could also easily be a real kit). Somehow we get to a Beck feel at the end of the track (heavy, deliberate, with a swagger in the vocal delivery and marijuana-oriented production), and by this point in the review I’m doing more of finger-pointing to influences than actually describing the tunes. Whoops. Moving on.

“Mhmm” is the pinnacle of the sex appeal of Dead Mystics and simultaneously one of the weirdest tracks on the album. It starts off sort of poppy (“all I know fades away / oh, sheila”), but also with a mellow cadence that drops out before building dramatically (clicking percussion is at the forefront of the production). “Once Again” has us veering again toward Beatles territory (chugging synths and booming, straight-eighth drums) in a psychedelic-addled march feel before “Show You” plunges us deep underwater for the conclusion of the album. It’s a distorted, filter-heavy number that has Alex singing intently but distantly (“I could/show you”) among sparkly synths (delightful bass tone) before building into a hectic, glitzy climax whose last notes conclude Dead Mystics, which seems fitting giving its gung-ho opening number. A final critique: I’m not so sure that the album artwork evokes the feels that the record itself evokes. At a glance, I would have expected something a little more folky, maybe Devenda Banhart-esque. But hey, it’s not my record, now is it?

Keep up with !mindparade on social media and buy their record on bandcamp or the Tree Machine Records site.