Just in time for Valentine’s Day, Brooklyn-based rock outfit Secret Crush dropped their debut ‘double single’ wrapped in a charming package of jangly electric guitars and nostalgic musings of past lovers. Though the four piece band has been playing shows around Brooklyn for several months, this release marks the first recorded sounds of the Secret Crush catalog. Secret Crush is fuzzy, very fuzzy. It’s easy to imagine the previous incarnations of the tracks played riotously in a music venue, reverb and volume cranked to maximum and neighbors complaining about sonic excess. 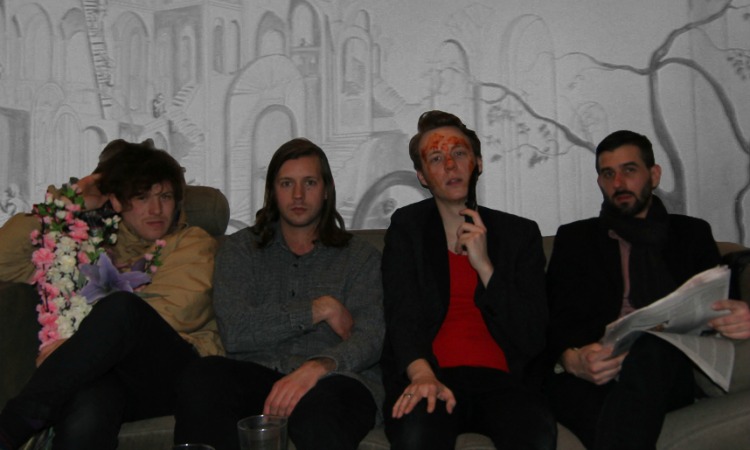 “Where To Run” starts with a surf-style electric guitar hook, immediately launching into an infectious groove. Although at times it’s hard to hear the lyrics through the swell of reverb and imperfect production, there are some really clever morsels: “been reading your old letters aloud / a foreign tongue second to none.” The driving rhythmic aspects of the track mesh perfectly with the adolescent confusion inherent to the lyrics (a would-be lover feels deserted and disoriented in the absence of the beloved), lending an artistic coherence to what would usually be perceived as a sort of poppy guitar-driven track.

“KGB” is vaguely about the national security organization of the same name. Secret Crush’s brand of spy music doesn’t evoke the suaveness and polish of James Bond, but rather the rough-around-the-edges swagger of Rambo. The guitars are dirty, the drums are a steady, and the words are a call and response dialogue between the two vocalists, similarly tinged with espionage: “I shouldn’t have let you try to / slip the cyanide into my Pepsi.” The guitar work is awesome – a similar dialogue appears between the instruments, each dancing around the original riff with fuzz and flourish. As the last grungy chord fades, the listener is left wanting more from Secret Crush, but the only way to get more is to witness it in person (at least for now).

You can grab Secret Crush’s double single on their bandcamp, and you can catch them this Wednesday at Alphaville, 2/27 at Palisades, or 3/13 at King’s County (all in NYC). Keep up-to-date with all their happenings on social media, bro.

A woman wearing a necklace made of french fries bites into a fry, then suddenly we’re in a chamber of weird sounds and bubble…