New York City-based garage rockers Phonoscenes just dropped a new single “Drive” recorded at the one and only Mama Coco’s Funky Kitchen. I’m familiar with these Columbia alumni by way of bassist Jacob Sunshine, who plays guitar in the hip-hop fusion band zetetics who have played so many of our No Smoking events. The name “Phonoscenes” comes from the French noun phonoscène, which was essentially a precursor to the music video. Here’s how they describe themselves:

Phonoscenes provides alternative medicine to your geriatric universe. Formed at Columbia University in late 2012, the band quickly graduated from gigging at cacophonous campus parties to performing at many of the most iconic rock clubs in New York. Phonoscenes keeps audiences on their toes, showcasing alternating lead vocalists amidst a bed of glittering guitar textures, vocal harmonies, and a constantly churning rhythm section. Their sound most commonly evokes garagerock revival and the surliest swirly sounds of early ‘80s New York post-punk. Cameron Erdogan and Dan Girma fight over vocals and guitar. Jacob Sunshine provides high-fructose bass alongside gluten-filled drums from Isaac Bunch. All four members share a king-sized bed in a recently condemned Brooklyn apartment. 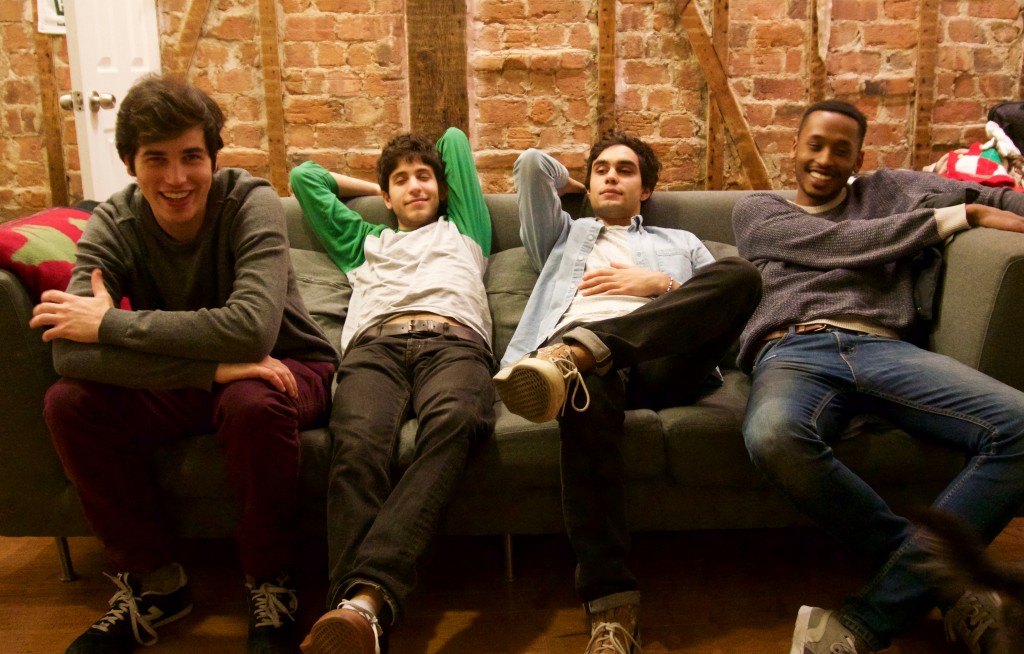 The A-side to this single, “Drive,” features a prominent and feelsy vocal delivery (“the end seems likely / but that is just like me”) which makes way for a really pleasingly wide guitar-and-bass production image (props must be given here to MCFK audio aficionado Oliver Ignatius for the richness of textures and effective pan choices). The chord progression doesn’t make me jump out of my seat in excitement, but the bass burbling and vocal enthusiasm give it the appropriate amount of energy – and hey, this is a single, and I’m more of a deep-cut guy myself. “Two Saddles” rewards weirder listeners like me with a more glitter-hazey number that combines plinking, circular guitar layers with a fairly staccato bassline and again fairly straightforward, background-oriented drum work. These tracks cut a weird-but-pleasant balance between melodic, “nice”-sounding verses and more throaty, intense chorus segments with distorted guitar – I guess that’s why they label themselves as both post-punk and garage rock. Labels are hard, man. Anyhow, “Drive / Two Saddles” is an excellent introduction to a band that’s clearly compositionally gifted and cognizant of its own genre-bending niche, and you should certainly keep an eye on their future releases.

Keep up with Phonoscenes on social media and stream their tunes on soundcloud. You can also see them live at Black Bear Bar this Friday for their single release show!

Palm is a noisy-yet-elegant rock outfit from Hudson, NY who holed up for a few months in October to produce a new album entitled…