New Jersey-based rap duo Negros Americanos are back in action with a new video for the m∞n-produced “New Shoes.” It’s been a few months since we’ve heard from these guys, which means it’s time to dive back into the world of N.A.! This video is homemade, but the beat comes from Budo Kiba Collective producer m∞n, and I can say with confidence that it is a spicy one. 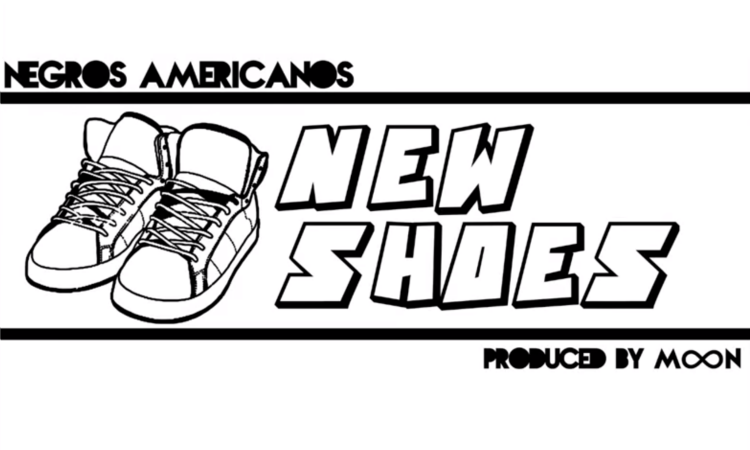 I have to say, I’ve been a fan of m∞n’s production for some time now. He’s designed a couple posters for No Smoking shows, and the smooth-lined aesthetic of his graphic design seems to cohere with his polished and groovy beats. Since Negros Americanos have always had a light-hearted and playful lyrical approach, their combination on this track is both compelling and amusing. It’s certainly not a profound revelation of a track (“I’ve got new shoes, yes I do, make a brotha scream woo-oo”), but its inclination toward the everyday is in itself something to appreciate. The video’s production echoes this domesticity, featuring shots of N.A. rapping in a sneaker store, on the streets of NJ (Plainfield, I think?), in front of a sign that says “Kwanzaa.” Basically, if you’re gonna watch a N.A. video, be prepared for a lot of dudes dancing/rapping in various locations. It’s clearly a formula that works for them.

Keep up with Negros Americanos on facebook and buy their music on bandcamp.

It feels strange to write that The Lemon EP is the first-ever offering from Brooklyn rock quartet Freind. This is (mostly) because, in blog…