It’s happened to everyone at some point, old sport, of this I am certain. You mean to see somebody, maybe you even make tentative plans, and then something comes up. Maybe it’s the sort of thing that usually turns out to be a one-and-done fluke but this time, it keeps happening. Plans are made and something comes up. Again and again it happens until it starts to become unacceptable, until you know you gotta make it happen, whatever it may be. For yours truly, it was seeing New York based up and comers argonaut&wasp perform live. I have missed their last three shows, all of which I had intended on attending. What can I say? Something came up.

On Thursday, October 22nd, argonaut&wasp took the stage at Drom, a venue located in the East Village and thus, encouragingly close to my debaucherous den. While preparing for the show, downin’ Beam from the bottle, again and again, I thought I’d sort of get in the right headspace by listening to the band’s tracks online in addition to peppering in some classics from the likes of the Talking Heads and New Order, both personal favorites. The combination makes sense as argonaut&wasp aspire to a similar aesthetic, that of the rock n roll band that people can and want to dance to. Speaking of which, there’s something very John Hughes about me dancing alone in my room right now. Maybe just one more drink and then the road, yeah? 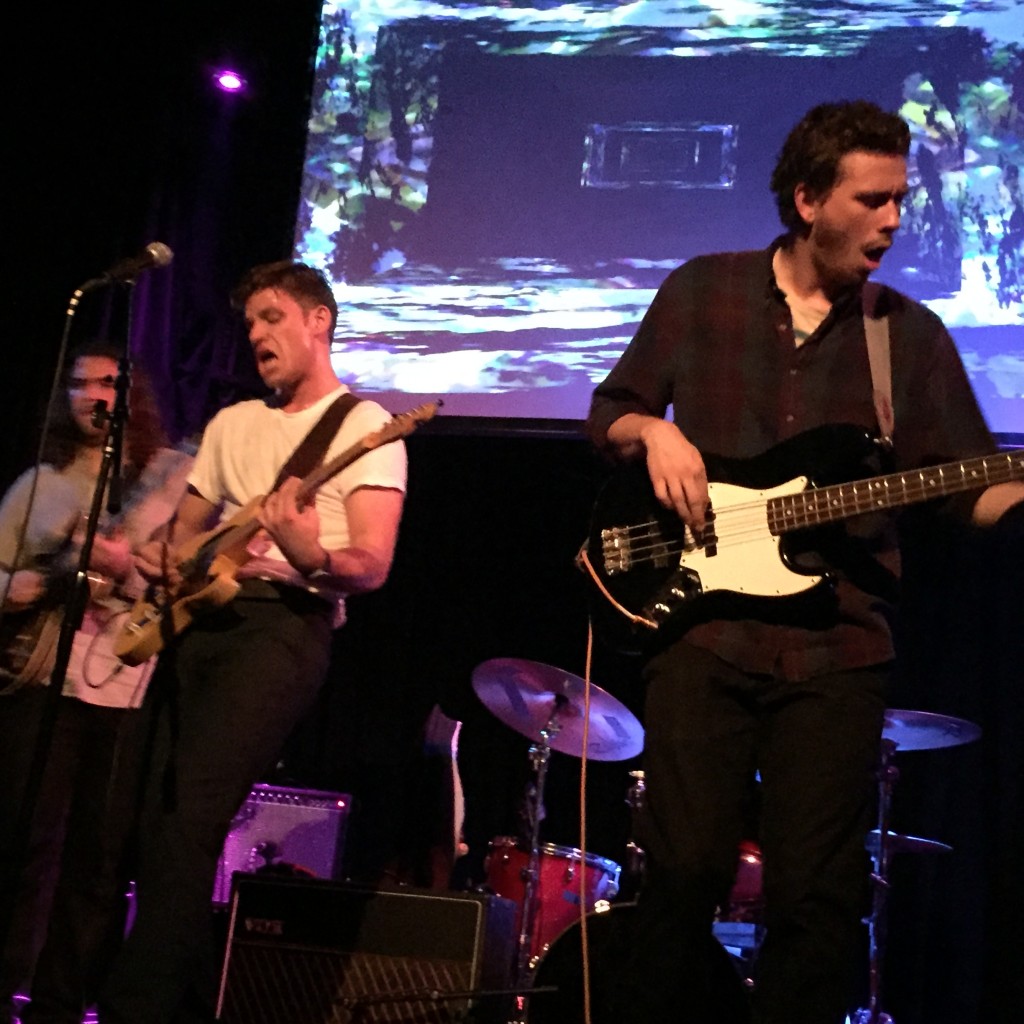 It’s 10:15PM and I am standing in the cavernous Drom, a subterranean destination located on Avenue A boasting five dollar Budweiser and a surprising amount room to shake, rattle, and roll as the kids say these days. As argonaut&wasp soundcheck up on stage, I am taken aback at the sheer number of pedals I see, counting twelve on the lead guitarist’s board. In fact, every guitarist has a pedal board and the keyboardist appears to be working with a computer and three sets of ivories. I notice a large chandelier above me. I notice limited stage lighting illuminating the five-piece in blue up upon a respectable, elevated stage. A screen is pulled down and a projector fired up to provide abstract visual accompaniment behind the band. Let the games begin.

Ladies and gentlemen, the groove is real. From the very start, frontman Trey Schibli, clad in fitted slacks, a slim navy blazer, and a white t-shirt moves like he’s been taking dance lessons from Michael Jackson, effortlessly providing a physical visual manifestation of the band’s music. He is Jackson’s Smooth Criminal, but Alan Palomo of Neon Indian also comes to mind. On the second track, Schibli picks up his beautiful telecaster and capably takes solo, purposefully throwing slightly dirty sounds into the otherwise clean mix. Though quite sonically pleasing, I feel he could get even messier with it. This could be the very element that elevates their sound, giving it just a little more bite. Christ, am I the only one who thinks it would have been so much more interesting were Duran Duran to have made some dangerous, dilapidated pop?

But it’s easy to see that credit for the music’s movement is due largely to bassist Alex Donkin, an indisputably major presence on stage as well as a fundamental element in the argonaut&wasp’s musical formula. Like Schibli, Donkin is hard to take your eyes off of, dressed in dark jeans and a fitted plaid shirt, constantly moving about with animated yet concentrated facial expressions. Though not dressed exactly like Trey, Donkin’s clean-cut look is in the same vein, one that suits their nightfall in San Tropez, nu-disco flavor and its likely audience as well. Call me shallow but agonaut&wasp have an aesthetics problem as the other three members, namely Theo Klein on keys, Adam November on lead guitar, and Chris Corsico on drums, play very well but do not look the part. Hah. A longhair like me playing Brian Epstein and suggesting haircuts and new suits. The irony. The horror. 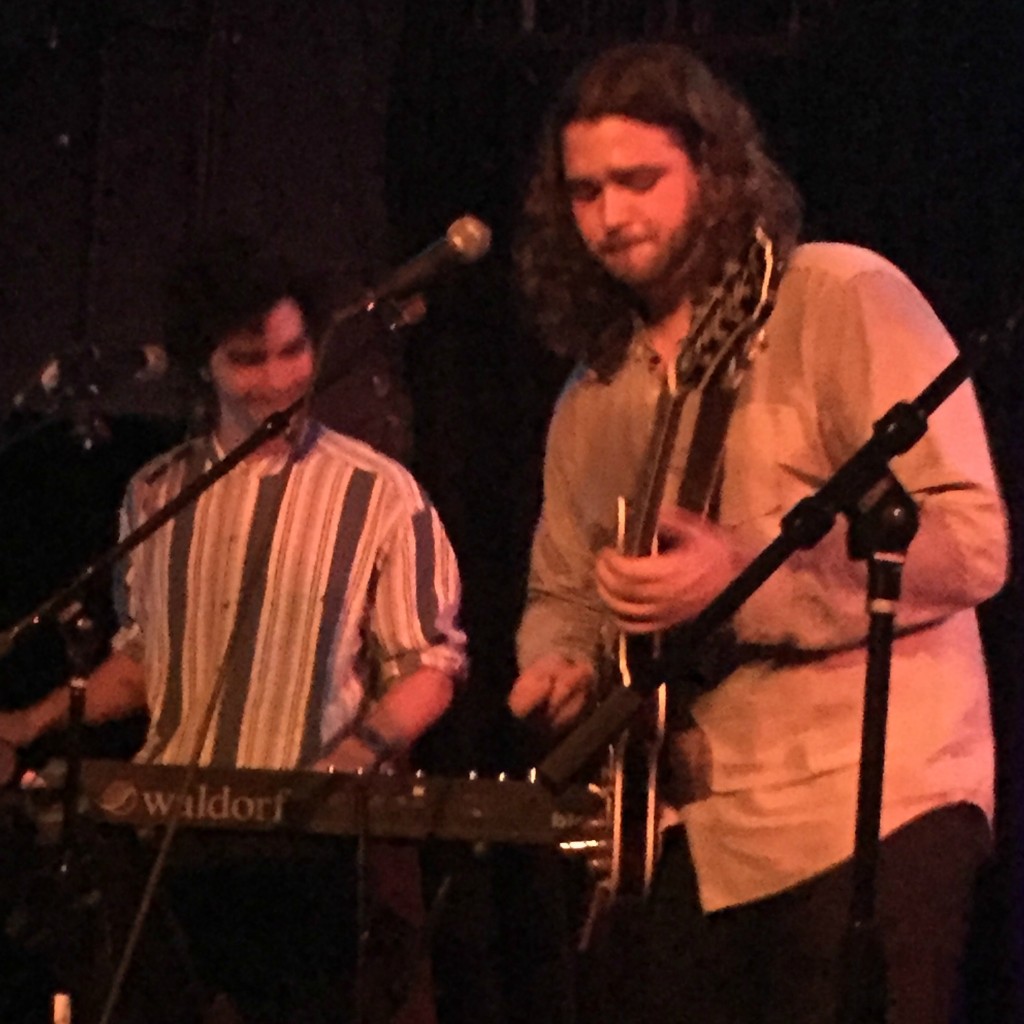 Allow me to be clear: the music itself is tight and very enjoyable almost without exception. This is a band that knows how to play together, one that communicates effectively onstage. Drummer Chris Corsico works strongly with Donkin’s driving bass lines and vice versa while Klein smoothly offers layers to the tracks by way of his keyboards and boy, can Adam November play guitar. It seems to me that while agonaut&wasp’s general sensibility lies in rock n roll, their strong understanding of dance/electronic music, with its popular patterns and progressions, affords them their success as seen on the main floor, where the crowd dances for the entirety of the show while I sit and watch and wonder why I drank so much beforehand between sips of Budweiser. It is pretty hard to understand how they remain unsigned.

At the same time, if argonaut&wasp hope to be the next Hot Chip, they have some work to do as a number of their tracks sounded pretty similar to one another. Moreover, the band would do well to avoid drawing too blatantly from their influences as is done really only on “Cigarettes & My Beautiful Wife,” an homage to the Talking Heads that comes off as little more than a cheap knockoff that fails to highlight the band’s abilities. Near the end of the show I find myself spinning slightly and am thrilled to watch the boys jump into their final and best number, “Pistol Pump Funk” which works even better live than on the record. If argonaut&wasp have a hit, this is it and it serves as a telling indication of how great this band could ultimately be. Slinking back to my bed, I suspect I’ll be following argonaut&wasp closely for a while. It’s like there’s something bubbling just below surface. With a little luck, we may just get something truly exceptional and soon too. Until next time, comrades. Over and out.

I got the chance to interview Kasie Kirkland (a.k.a Yung Mayne) on her radio show High Wasted on kPiss, which airs every Thursday night…