It’s 2015 now, and the music industry is still rapidly changing and feeling the ripple effects of the age of free information, also known as the Internet. Social media has altered journalism fundamentally, in ways that we don’t fully understand yet. It’s clear that new media is the future, but how do we reconcile this with forms of artistic expression? Social media equips everyone with a voice, so how does social media fit in to the new models of journalism? No Smoking will discuss this more [intelligently] in future, but for now let’s hear it from Twitter.

Waxing eloquent their frustration towards music journalism, concerned citizens are mobilizing to Twitter to voice their grievances. Much of the civil unrest originated from the alleged lack of qualification from the journalists.

Some twitter users, such as yung geisha, require all opinions to be accompanied by a degree from an institute of higher education. Her profile picture is a low resolution jpeg of Pikachu.

It has not yet been confirmed what university yung geisha attends, but from her recent retweets of Coachella 2015 and Justin Bieber shirtless, experts believe she is a high school student.

Sabrina Vaz-Holder, a self proclaimed “Media Expert” and frequent tweeter from Maryland, managed to compose her thoughts at 5:49 AM:

Madam Vaz-Holder was awarded 7 retweets for her efforts, which is still three more than No Smoking has ever received. Included also in her recent tweets is a reposting of a Macklemore video and a photo of an ice cream sandwich.

Twitter user Yer Actual GTC dons his fedora to let the internet know intimately his derision for the sheeple who read music blogs. Though it has not been confirmed which particular music Yer Actual GTC is condemning, his recently tweeted music contains two My Bloody Valentine Youtube videos. 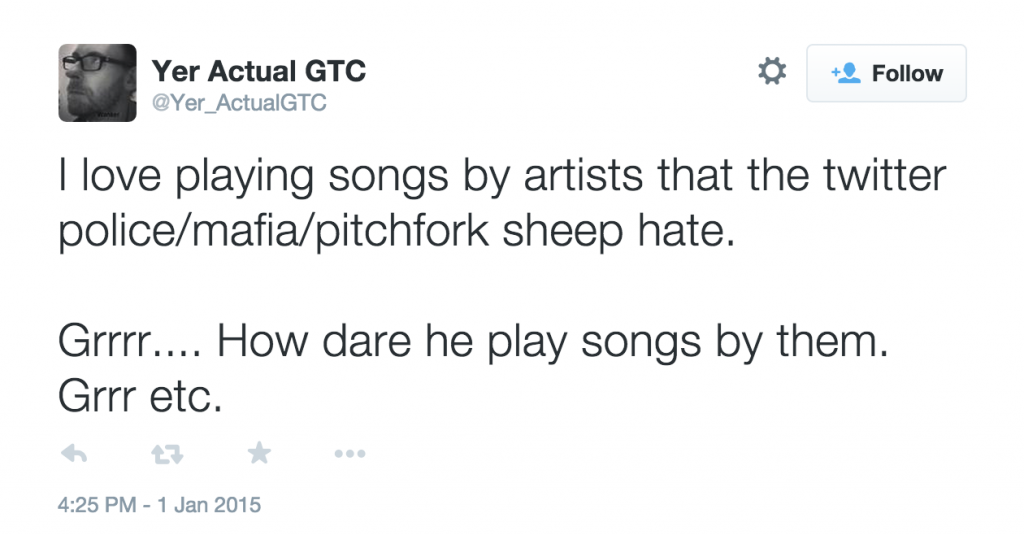 Though it’s not exactly clear what heathen objected to Sir GTC playing his favorite underground 90’s alternative bands, it’s clear from his black and white photo that he is an artistic individual. Tragically, the imagined opposition to his music taste didn’t garner any sympathy for GTC and unfortunately for our dear hero, the response to his tweet was less than euphoric – Yer Actual GTC received no likes or retweets for his shining example of individualism. But you wouldn’t care about that, would you m’lady?

Earlier this week, solo electronic ambient producer Tobias released his long awaited compilation, Side B. Side B comes to us as the follow up…