Sun Looks Down is a band which categorizes itself as “purple.” It’s a perfect descriptor for a group which absolutely defies the common understanding of genre – under their influences they list The Flaming Lips, D’Angelo, Funkadelic, and The Doors (to name a few, and to name them haphazardly). I first saw them just a couple days ago as the backing band for one very talented man named Amani Fela (check out his raps) at Muchmore’s, and even though I’d listened to their recorded material in the past in a very cursory way I had no idea that they were going to blow me away as they did that night. As it turns out, they jam out on hip-hop/jazz/soul grooves just as hard as post-rock/shoegaze ones; the recorded material I’ll discuss here is also excellent, but it’s kind of hard how it would relate to Amani’s music until you actually see it for yourself. This is also a great way of shamelessly promoting the next No Smoking event at Nola, Darling on 4/17 – Amani will be performing with Sun Looks Down, which is pretty much the best thing to ever happen, amirite? 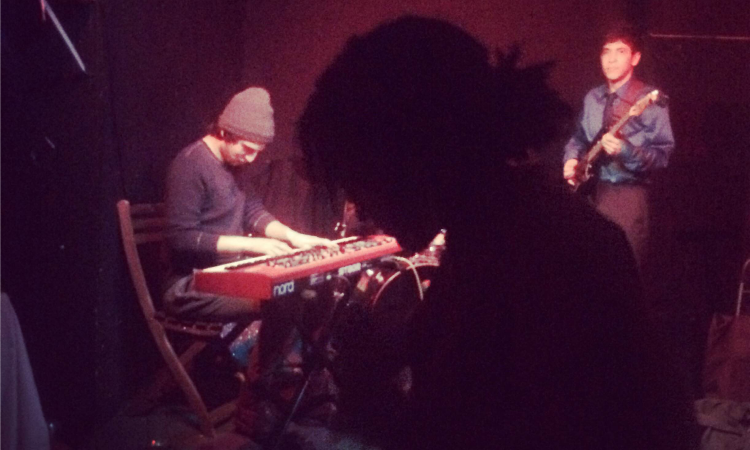 Sungaze was recorded at Mama Coco’s Funky Kitchen, which puts Sun Looks Down in association with some pretty awesome people (see: No Shoes, The Britanys, so many others). The first track, “Moonshine,” was released as a single ahead of the EP – it’s delicate, deliberate, and an extremely vocal-centric number. Even though the bass part is played by keyboard and there doesn’t seem to be more than one or two guitar tracks, the sound is extremely full and satisfying. MCFK’s Oliver Ignatius has a distinctive recording style, that’s for sure. I’d describe the production as ‘clean’ if I had to pick one word, and it’s a style that fits Sun Looks Down pretty damn well. Like the other tracks on the EP, “Moonshine” gets pretty close to the six-minute marker, but I pretty much never question the restraint of this band. When they take an extra two minutes to jam out and deconstruct their carefully-composed rhythms, it’s a necessary expansion. It’s difficult to even view this kind of music in such a critical lens – I’m clearly intended to just sit back and feel the grooves, man.

“Wash Out the Red” is almost, uh, post-country. The tonal structure reminds me strongly of Americana/new age groups, but again, genre is a pretty unsatisfying way of describing sound. It’s another slow burn number with wailing guitar parts (alternating delay-soaked non-tonal clicks and ordinary lead guitar melodic riffing). The twang is strong with this one. I suppose on this EP it’s fairly standard for songs to start out simple and gain complexity/lose that ‘clean’ production vibe as they continue on. Rhythmically, the EP sways. “Eastern Seas” features some truly trippy synth leads and the sort of swirling progressive guitar parts I’ve come to expect at this point. I’ll bastardize my review again with genre – some of these chord progressions remind me vaguely of power metal that I used to listen to back in the day, except that Sun Looks Down isn’t contrite or overly dramatic or completely without groove like Sonata Arctica and Falconer are/were. Is “good power metal” a thing anyone’s even trying to call themselves anymore? I think not. Moving on.

“Crazybird” is the track set to stream first on Sun Look Down’s bandcamp, and I can sort of understand why. It’s the most melancholy and possibly the most developed track on the EP, shifting from a feel I’d briefly describe as ‘wavy’ to a feel that’s more granular/particular and plucky. There’s a definite feeling of instrumental progression and dynamic shift between every single distinct segment of this track – I could describe it as driving, deliberate, tripped-out, and meticulous all at once. Adjective overload. As I usually conclude my reviews, you should probably just go ahead and take a listen to the album for yourself. They don’t need words to justify them.

You can keep up with Sun Looks Down on social media or stream their music on Bandcamp. More importantly, you can come see them at the second-ever No Smoking showcase at Nola, Darling on 4/17.

Echoscape is the project name of one Satoshi Inoue, a Brooklyn-based musician and a guitarist in the truest sense of the word. He has…