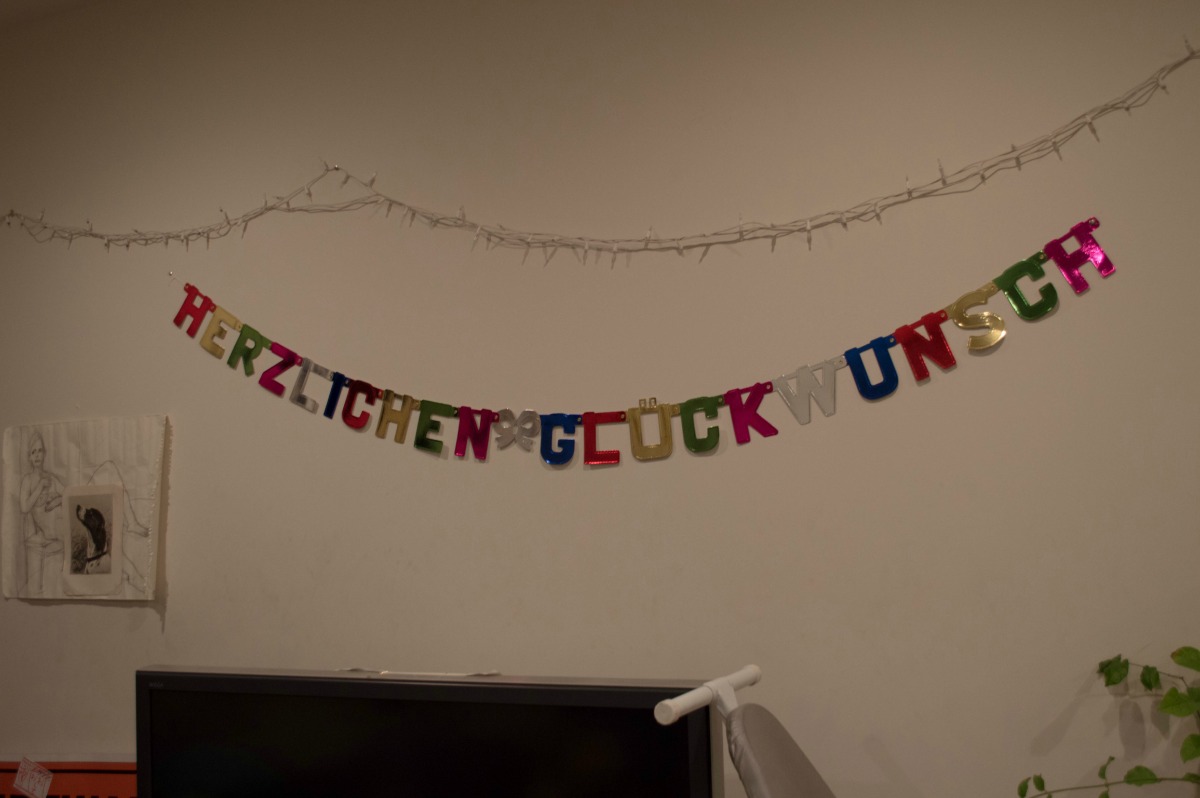 The residence of Ackerman isn’t what you’d expect from a group that makes music inspired by dreams. The beautiful behemoth of an apartment, tucked neatly under the BQE is, even on a Sunday evening, filled to the brim with a dozen giggling youth. We are welcomed graciously. The apartment’s surfaces are strewn with an assortment of records, papers, books, dishes, bowl pieces. Clumsily drawn doodles adorn an entire wall, brimming with creative outburst and snarky humor – “Jesus DIED” reads one piece, serving as a muzzle for a giant print of Batman. Among the clamor approaches a grinning, curly-haired figure, who says “Let’s do this interview,” and, to the photographer: “Are you going to take pictures?”

Ackerman is collaborative, but it is the brainchild of Jordan McAfee, a Boston-cum-Brooklyn-based (hyphens!) musician and NYU student. Also sitting for the interview is Matti Dunietz, who plays the drums for fellow Brooklyn band With Snack in addition to providing the percussion on Ackerman. We are invited into a basement where the chaos of upstairs is only muffled, and where Jordan and Matti make their music. Jordan describes it as thus: “I make music inspired by dreams that I have had, or dreams that everyone has had.” 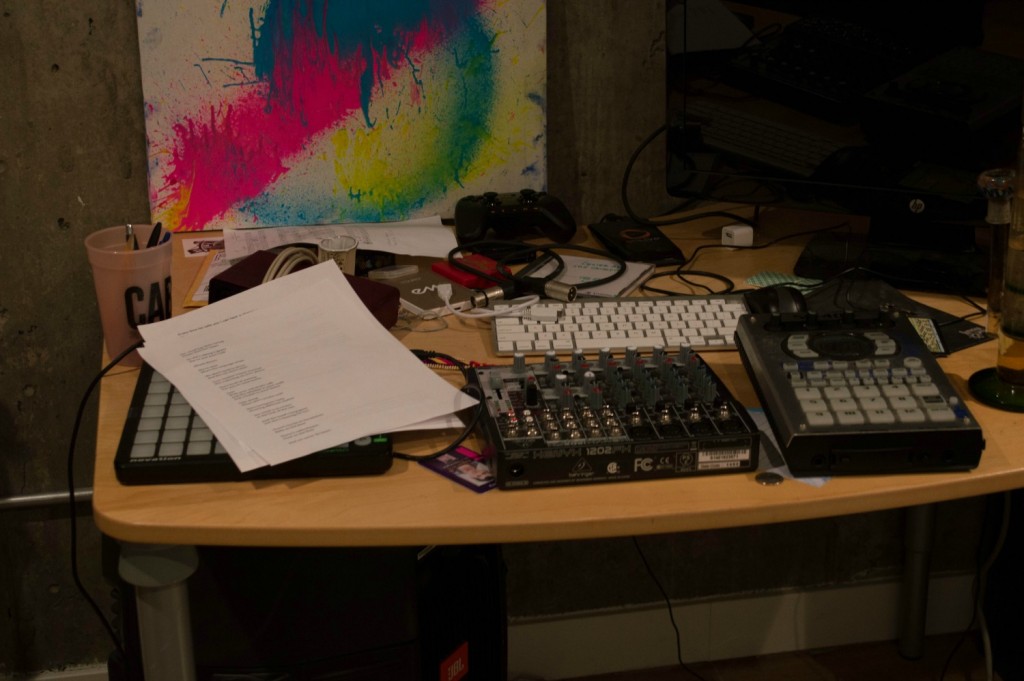 If the tangle of wires and samplers is any indication, Ackerman’s music makes heavy use of electronics and digital instrumentation. “Growing up writing songs in Logic, as opposed to writing them on a piece of paper – which is also why so much of the shit I write has more of an electronic sound, a digital sound. Even though I’m using normal instruments, I’m playing them through this weird filtering thing.”

“I don’t sit down and work out sections. I guess all my music has really weird phrasing, or is a song that just develops one chord and never changes.” A pause. “I guess that could just be shitty songwriting, but that’s how I do it.” He mentions that he found inspiration to record after his brother did it first. Elie McAfee, the absent member of Ackerman, recurs like a specter throughout the interview. Jordan is older than his brother by two years, but he, by Jordan’s own admission, is “more musically mature than me in every way.” I’m surprised to hear that his brother is “actually not on the album at all. But yeah, the next one…” 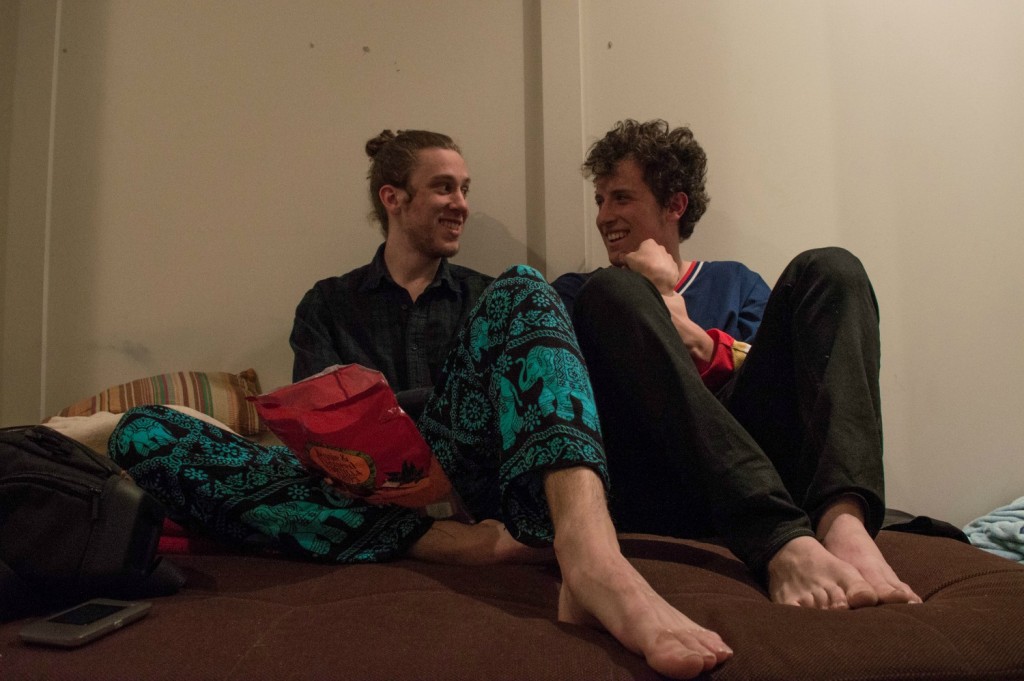 The topic of acapella music comes up. Jordan says, “Acapella, dude. I was in three acapella groups in high school – I sing on all of the tracks in the album.”

“Except for one song, the last one’s an instrumental. Oh, and the Chris one,” Matti interjects – throughout the interview, Matti is a quiet and peaceful presence, gently prodding Jordan’s answers with factual details. Jordan nods, and indicates towards the staircase, “Yeah, and our friend Chris sings on one of the tracks. He’s up there chopping tomatoes.”

Several of the songs on the upcoming album have been brewing for a long time in Jordan’s head – some songs are continuations of music he worked on in high school. “I just left it and didn’t touch it at all. I wanted to take it in a different direction – the first album was sample based. I sold all my stuff and bought a sampler, in true Animal Collective fashion.” He chuckles, at first bashfully and then thoughtfully. We had begun our conversation talking about influences, rattling off bands and musicians we had both listened to in high school. “This album definitely has more of me in it than my other albums. I’m not shaping other people’s sounds.”

There is a muffled crash upstairs, followed by a collective giggle and scattered clapping. Jordan and Matti look at each other, grinning, and offer the explanation, “It’s Taco Tuesday” – it was Sunday – “You can’t have taco Tuesday on a Tuesday.” 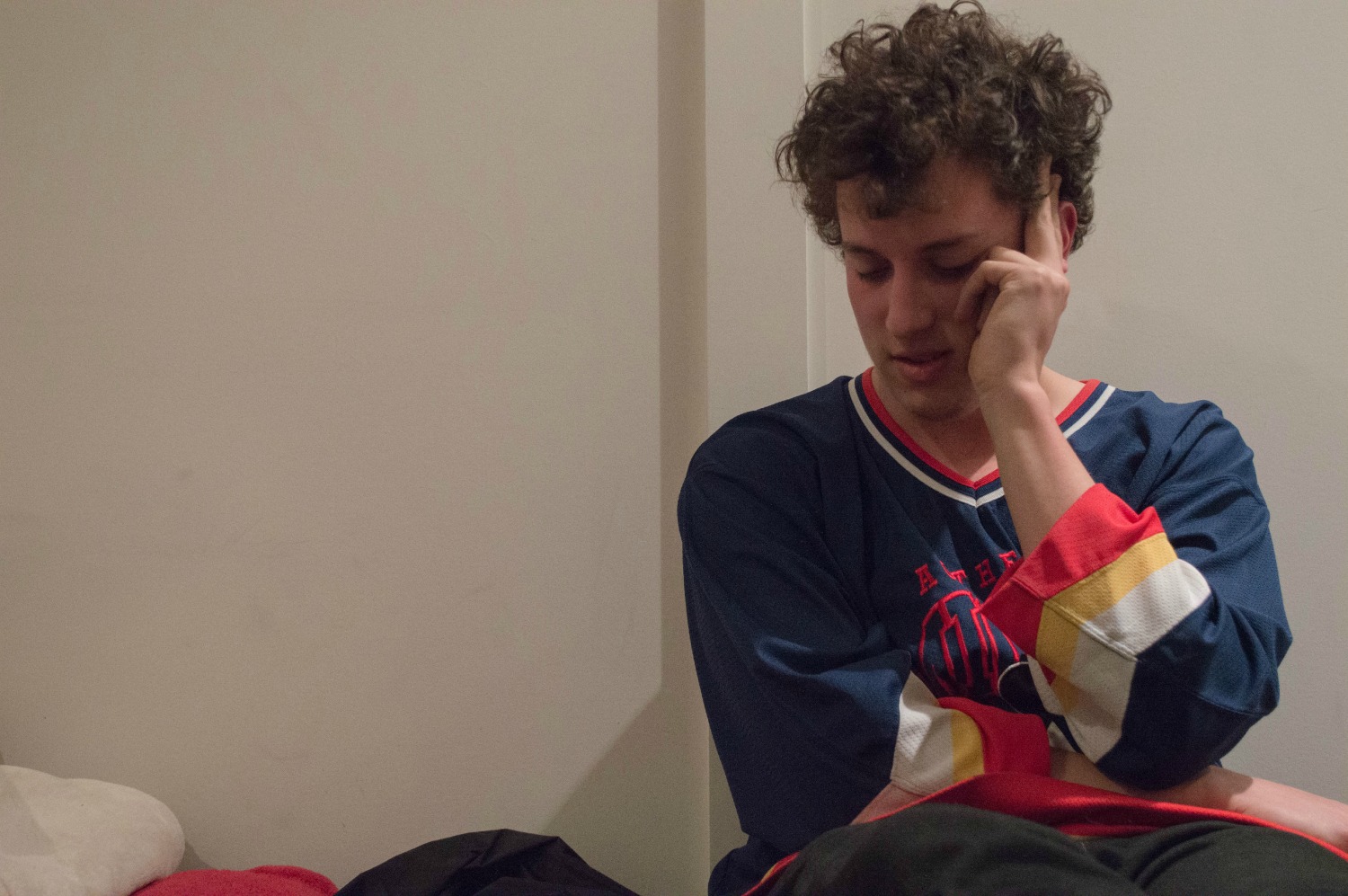 At some point Matti leaves, presumably to consume aforementioned tacos, and Jordan invites me to listen to the whole album on the speakers they were mixed on. We sit in Matti’s room, windowless and decorated in psychedelic tapestries, and Jordan puts on his art. As we settle into listening, Jordan offers myself and the photographer marijuana, saying “I mostly just smoke weed and listen to music and sleep. I’ve learned nothing about the world I live in”. We oblige.

Most of the listening is quiet and serene, with several interjections about the song’s title or the time period in which it was written. His bandcamp tag states “music made for dark rooms”. I make a comment about how the vocals sound influenced by Avey Tare – strange mouth sounds and bizarrely beautiful inflections. Jordan seems pleasantly surprised. The topic of influences was recurrent throughout our conversation – we bonded over commonality of influences, and the delicate balance of being inspired by others’ music without taking from it. It’s summed up in a comment made earlier: “You can’t make a Pavement album”. 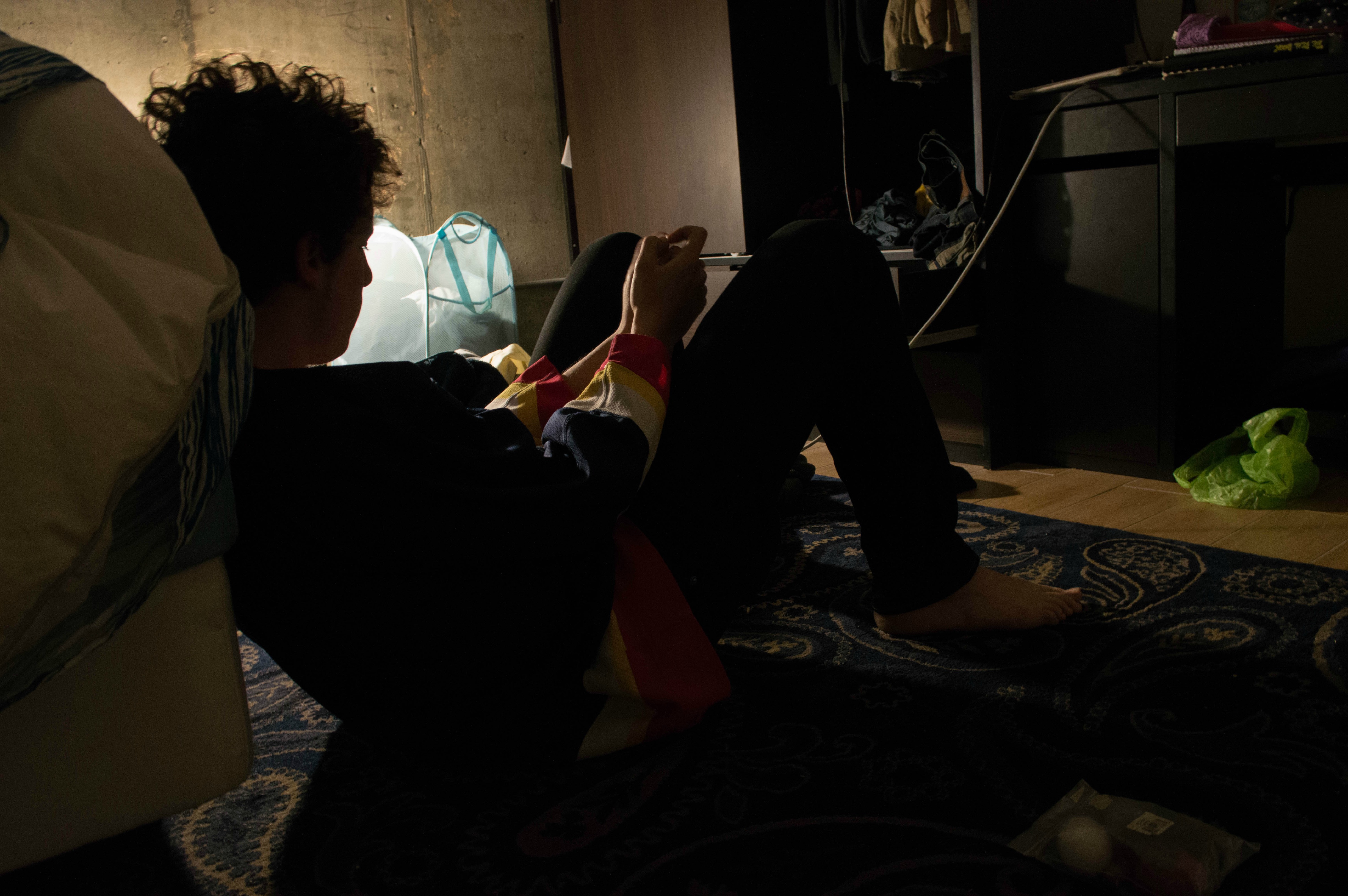 As we sit, splayed out in Matti’s bedroom, a quiet camaraderie appears. This is Jordan at his most comfortable. He, like me, prefers dark spaces and cold temperatures: the chilly room adorned with glow in the dark stars is the perfect sanctuary for dreamy psychedelic experiences. He, who initially felt weary of pictures and relished in ambiguity, is now comfortable to sit in the soft glow of ambient lighting and ruminate on these sounds of his own creation, the naked and vulnerable experience of sharing one’s art with others.

The album ends in a sleepy hiss, pressurized ambient sounds swirling through the speakers and quietly fading into outer space. It’s a humbling end to an exhaustive and honest album. “Well, that’s it I guess,” Jordan says, unplugging the auxiliary cable with a cathartic, self-satisfied grin.

Ackerman’s new album Sleep Songs is out 4/19. Find them on Bandcamp and Facebook.

It’s been a while since I first heard Foxygen’s “Shuggie.” My introduction to the late 00s/early 2010s revival of 1970s guitar rock tropes didn’t…