Decent! A good, hearty, and affordable bowl of ramen.

Between just moving into a new place, and not having enough time to house-sit as National Grid sets up gas, I have reluctantly had my fair share of takeout, microwaveable dinners, and rice (thanks to my trusty and nifty rice cooker) this week. On Wednesday, after waking up feeling a bit under the weather, the thought of another microwavable meal made my stomach turn. It also happened to be one of the coldest days I’ve experienced this entire winter. I thought a bowl of ramen would suffice. It was 10:45 am and I had just gotten out of class. After yelping a few ramen spots, I opted for a place I’ve walked past a million times but had never had the opportunity to try — Dojo Restaurant, described as a “long-running college student favorite with a budget menu of everything from burgers to Japanese fare.”

Dojo Restaurant, which has been around since 1974, has seen it all: street riots, pop art, and music culture movement stemming from popular figures such as Andy Warhol and Jean Michel Basquiat. (The restaurant’s site delves further into the history of the restaurant if you’re interested.) After undergoing renovations in 2014, Dojo added more Japanese food options and constructed a ramen shop within the restaurant. 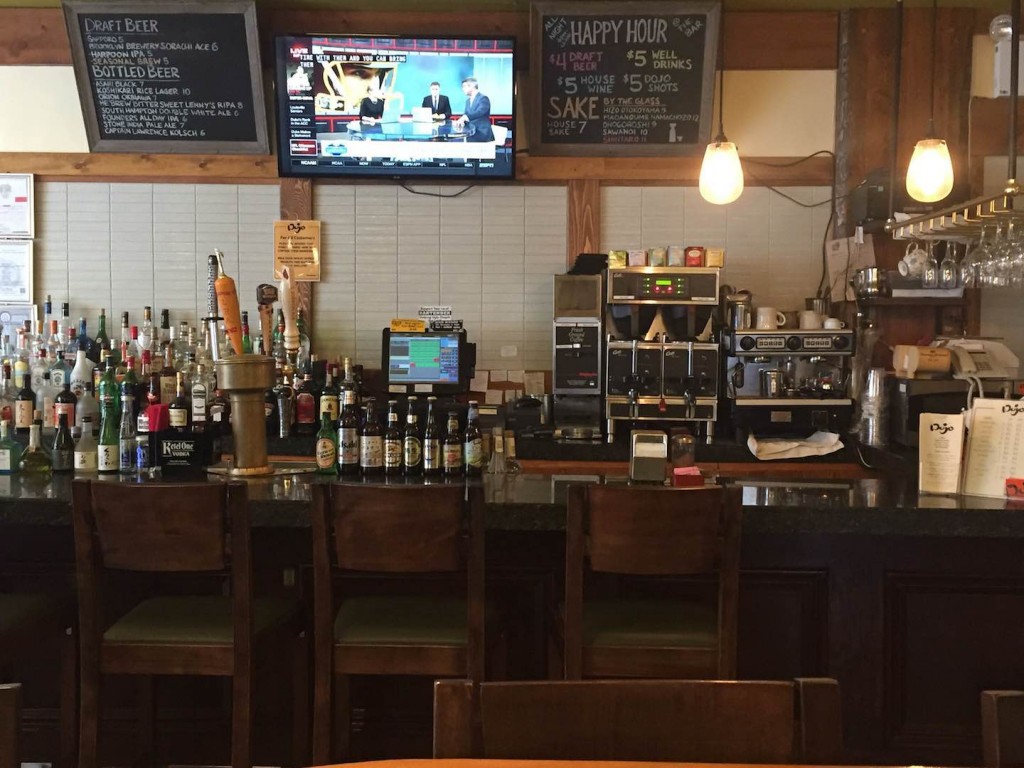 Not only was Dojo one of the very few restaurants serving ramen as early as 11 in the morning, but the service was also quick and the waiters were beyond friendly. I was sat at a table facing the bar, a sort of middle ground between the new ramen extension and the older, more traditional part of the restaurant.

They have a wide variety of ramen — 7 different selections offered throughout the year and 1 summer special. I ordered the miso ramen for $13, which is a solid staple I usually use to gauge the quality of ramen at different restaurants. My dish was ready within 10 minutes. The miso ramen served here consists of a soybean paste base made of white and red miso paste, homemade tonkotsu pork and chicken broth, wood-ear mushroom, corn, scallion, wakame seaweed, bamboo shoots, soft boiled egg, bean sprouts, and pork belly. I’m not the biggest fan of eggs, and they agreed to switch out the egg for more corn without any hassle. The broth was perfect. Not too salty or thick. The noodles weren’t bad either, although I wish they were firmer. The pork was almost as good as the broth. While some prefer pork that has a bit of fat, fat on meat turns me off, so I will leave it to you to form your own opinion on their pork belly.

I would definitely recommend this restaurant to anyone looking for a good hearty and affordable bowl of ramen. I personally rate the bowl of ramen I had as a solid 3 on a scale of 1-5. They also have ramen and bento boxes ready to go which is convenient for students and young professionals who are always on the run. Thanks for reading!

A New York City born and raised unconventional chick. Current sophomore at NYU majoring in psychology and science with an appreciation for the more simplistic things in life, like food.

Photos and gifs from last month’s Trie Showcase at Babycastles in Manhattan. Full size photos and hi-res downloads available on our Flickr.